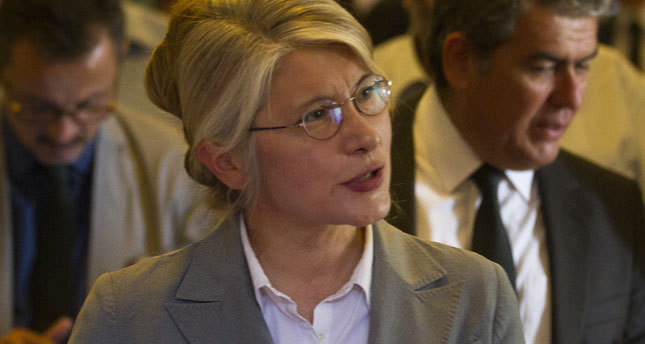 The Republican People's Party (CHP) Ankara Deputy Emine Ülker Tarhan yesterday refused to rule out running against Chairman Kemal Kılıçdaroglu in the extraordinary party convention scheduled for Sept. 5 and 6. Tarhan, whose comments came a day after Deputy Chairman Muharrem Ince announced his intention to contest the leadership, said that the current administration had to leave and that she had not decided whether or not to run for party chair. Still, the chances of Kılıçdaroglu remaining as leader and chairman of the party seems a lot stronger as 78 out of 81 CHP provincial chairmen declared their support for him ahead of the convention.

The only three provinces that did not pledge support for Kılıçdaroğlu are the provinces of Düzce, Yalova and Isparta. "We support Kılıçdaroğlu's struggle for freedom, democracy, universal law, human rights and peace," the joint declaration said. The foreign branches of the party pledged their support to Kılıçdaroğlu in a joint statement issued on Tuesday. To stand against Kılıçdaroğlu, İnce must secure the support of at least 10 percent of congress delegates. To become chairman, he must win an absolute majority.

İnce's criticism of Kılıçdaroğlu and the CHP administration concentrated on intra-party democracy issues. "You [Kılıçdaroğlu] came to power in the CHP with intra-party democracy promises four years ago, now you bring dictatorship to the CHP. I cannot accept this. I don't want dictators both in my country or party," İnce said. Kılıçdaroğlu responded to İnce's accusation through his personal Twitter account by saying, "The congress decision that the CHP took aims at reconciliation of the party, not dissolution."

Meanwhile, former Şişli district mayor Mustafa Sarıgül, who previously slammed the party leadership for the presidential election failure, announced his support for Kılıçdaroğlu in the upcoming extraordinary party congress. Sarıgül had allegedly made a deal with Kılıçdaroğlu for receiving the vice-head position in the party's Central Executive Board (MYK). On the other hand, Tarhan, who is close to the hardline Kemalist wing of the CHP was pleased with İnce's candidacy and evaluated the upcoming party congress: "The extraordinary party congress will stick to a 15 day period. In this narrow period of time there is an ongoing possible negotiation and congress calculations. The mindset in the CHP needs to change. I see an alienation from the fundamentals and principles of the CHP in the party"

The internal rivalry in the CHP began when Sarıgül and former CHP head and current Antalya Deputy Deniz Baykal had a dispute, which resulted in Sarıgül's resignation after accusations of corruption and misuse of authority.

Amid the rising voices and chaos prevailing in the CHP, Baykal gave a green light for a new party administration and said that he wanted to see an "old CHP" protecting the party principles, raising its voice against mistaken policies, but still being enthusiastic. Baykal said that the CHP needs to rise to its feet again.

Last week, 50 current and former deputies from the CHP called on Kılıçdaroglu to resign from his post. In their statement, deputies said that the responsibility for their failure in the presidential election is "not voters who did not cast [a vote] but it is Chairman Kılıçdaroglu, directly." Six hardliner Kemalist deputies led by Tarhan called for the resignation of the chairman following the CHP and Nationalist Movement Party's (MHP) joint presidential candidate Ekmeleddin İhsanoğlu's defeat in the presidential election.
Last Update: Aug 20, 2014 4:35 pm
RELATED TOPICS