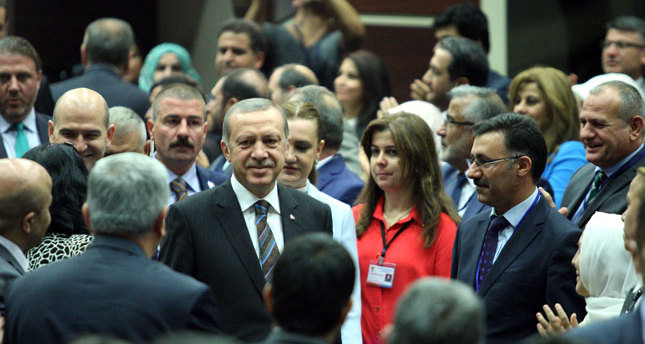 The ruling AK Party's Central Executive Board meets today to select its new chairman and prime minister, posts soon to be vacated by President-elect Erdoğan

The Justice and Development Party (AK Party) will hold its Central Executive Board (MYK) meeting on Thursday to elect their chairman, which will be voted on by party members in an extraordinary congress on Aug. 27.

Last week, President-elect Recep Tayyip Erdoğan noted that the ruling AK Party would announce its new chairman, who will also be the next prime minister, following the MYK meeting. In the extraordinary congress that will be held on Aug. 27, party delegates will vote for the chairman. Turkey started to talk about possible names for the Prime Ministry months before the presidential election; however, these days talks concerning "who is going to be the new prime minister of Turkey" intensified after Erdoğan's victory in the presidential election. Yet, Ahmet Davutoğlu's name shines among possible candidates according to the public. In a talk with the press, President-elect Erdoğan delineated the qualities of the next prime minister: The next prime minister should never take a step backward in combatting the Gülen Movement and will never make concessions against them. The prime minister will pursue common sense and consultation in times of crisis. He will protect the AK Party's core principles, values and codes that have kept the party in power for the last 12 years. The prime minister should carry the AK Party movement into the future. And finally, the prime minister should undertake both the AK Party chairmanship and the Prime Ministry at the same time and never be regarded as interim. Political circles believe that Davutoğlu will probably be the new prime minister because he is not blocked by the AK Party's internal three-consecutive-terms rule and fits all the qualifications indicated by Erdoğan; his name is expected to be announced after the MYK meeting on Aug. 21.

Furthermore, research was conducted by ORC (Political Survey Institution in Turkey) that asked AK Party voters "who do you desire to see most as prime minister of Turkey;" 60 percent of the participants said Davutoğlu. Likewise, another survey also pointed to Davutoğlu. Outgoing President Abdullah Gül also shares this view. Thus, it seems Foreign Minister Davutoğlu will take over as prime minister.

Meanwhile, political circles have started to talk about a possible cabinet revision after the Aug. 27 extraordinary party congress. It is rumored that ministers concerning economy management – Mehmet Şimşek, Ali Babacan and Cevdet Yılmaz (Ministry of Development) – would retain their seats in the cabinet. On the other hand, Hayati Yazıcı (Minister of Customs and Trade) and Faruk Çelik (Minister of Work and Social Security), who was harshly criticized after the Soma Disaster, will be removed from their positions. It is also expected that Efgan Ala will continue to serve as interior minister in the cabinet. Political circles close to the AK Party anticipate that Numan Kurtulmuş, Mahir Ünal and Mustafa Şentop would be included in the new cabinet.