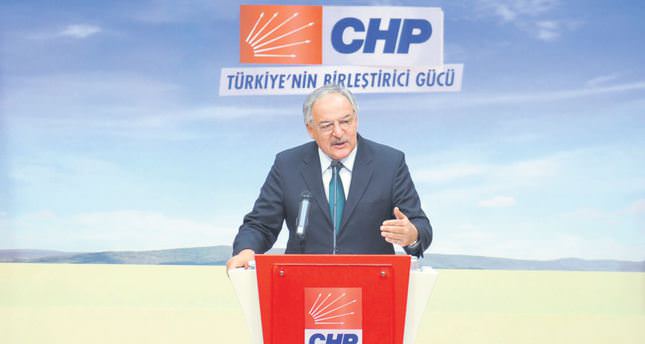 As the main opposition CHP heads into an extraordinary congress, the party's central executive board gathered to discuss congress preparation while eyes turned to possible chairmanship candidates

Ahead of the Republican People's Party's (CHP) extraordinary party congress to be held on Sept. 5-6 at Ankara's ATO Congresium, CHP's Central Executive Board (MYK) convened yesterday under the leadership of CHP leader Kemal Kılıçdaroğlu amid increasing chairmanship tension and intra-party opponents' criticism of Kılıçdaroğlu.

Speaking to the press regarding the MYK, CHP Deputy Chairman Haluk Koç stated that slight disputes within the CHP have been exaggerated while tension within the Justice and Development Party (AK Party) has been boiling.

The CHP assembly assigned five MYK members to carry out the extraordinary party congress, including Gürsel Tekin, Tekin Bingöl, Bülent Tezcan, Haluk Koç and Emel Yıldırım. Families of those who lost their lives during the Gezi Park protests, families of miners who lost their lives during the Soma mine tragedy and representatives of certain NGOs and unions will be invited to the congress.

It is asserted that Kılıçdaroğlu will not include members who he had disputed with in the Party Assembly (PM) and MYK, which will be renewed after the congress. Several media outlets alleged that whether Kılıçdaroğlu or former Group Deputy Chairman Muharrem İnce, who recently announced his candidacy for chairmanship, is elected as the CHP leader, names in the forefront of the CHP will see a significant change.

While İnce officially announced his candidacy, eyes turned to neonationalist CHP Ankara Deputy Emine Ülker Tarhan, who was in the forefront when CHP dissidents raised their voices against Kılıçdaroğlu and Turkish Bar Association head Metin Feyzioğlu over whether their candidacy announcements will be on the agenda. It is reported that Feyzioğlu's candidacy will become clear after the Sept. 1 judiciary ceremony. Circles close to the CHP said that the chairmanship race will be between İnce and Kılıçdaroğlu.

It is alleged that CHP Istanbul mayoral candidate, who failed in the March 30 local elections, Mustafa Sarıgül's close contact with Kılıçdaroğlu
created disturbance within the party. According to Turkish newspaper, Sabah, Sarıgül aims to take the role of deputy chairman of local administrations in the MYK which will be renewed after the congress. Sarıgül, who was harshly criticized by Kılıçdaroğlu after the March 30 local election failure, last week took side with Kılıçdaroğlu before the cameras and signaled that he would support Kılıçdaroğlu for the chairmanship.

CHP Istanbul Deputy Umut Oran stated that CHP's joint candidate formula and the profile of the joint candidate Ekmeleddin İhsanoğlu was problematic. Oran noted that the CHP should self-criticize and face the failure of the CHP in the Aug. 10 presidential election. Oran added that the main objective of the congress should not be debated, but to strengthen the CHP's organizational structure and determination to come to power.
Last Update: Aug 21, 2014 2:10 am
RELATED TOPICS