CHP chairmanship race heats up ahead of extraordinary congress 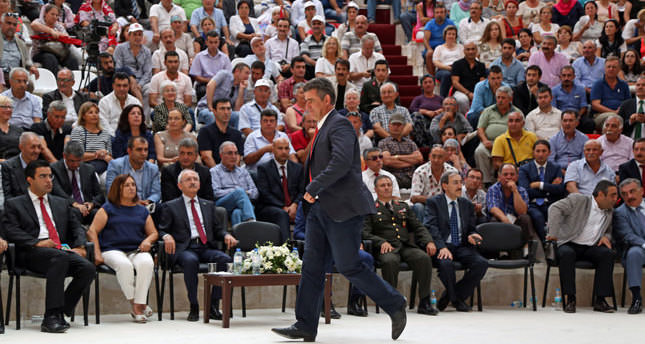 In recent days, Turkish Bar Association head Metin Feyzioğlu announced his candidacy for the party chair on a TV program. Feyzioğlu said, "I will be a candidate not to polarize, but to unify. Of course, I have a political view. Of course, I can be a candidate. Why not? This is my democratic right, and [will do so by the] instruction of millions of citizens to me." CHP Deputy Chairman Muharrem İnce resigned from his post last week and officially announced himself as the first rival that will run for the chairmanship against CHP leader Kemal Kılıçdaroğlu.

Ince criticized the current administration saying, "Before he came to power, Kılıçdaroğlu promised intra-party democracy. Now, this man is gone. Instead of him, a man came in who determined every single affair in the party. I will bring democracy to the CHP."

Also, former CHP leader Deniz Baykal, who was purged from the party because of a sex tape scandal, reportedly started to take the pulse of CHP supporters for chairmanship candidacy. Baykal has been consulting with CHP members in secret in an effort to return to his post in an extraordinary party congress, according to Sabah newspaper.

After the CHP defeat in the Aug. 10 presidential election when joint candidate Ekmeleddin İhsanoğlu did not meet the CHP administration's expectations, the CHP is heading to an extraordinary convention due to the party dissidents who raised their voices against Kılıçdaroğlu's "risky İhsanoğlu move."

Even though CHP dissidents spoke out against Kılıçdaroğlu, the chances of Kılıçdaroglu remaining as leader and chairman of the party still seem a lot stronger as 78 out of 81 CHP provincial chairmen declared their support for him ahead of the convention. To stand against Kılıçdaroğlu, İnce must secure the support of at least 10 percent of congress delegates. To become chairman, he must win an absolute majority.

The foreign branches of the party pledged their support for Kılıçdaroğlu in a joint statement issued on Tuesday.

Also, former Şişli district mayor Mustafa Sarıgül, who previously slammed the party leadership for the presidential election failure, announced his support for Kılıçdaroğlu in the upcoming extraordinary party congress. Sarıgül had allegedly made a deal with Kılıçdaroğlu for receiving the vice-head position in the party's Central Executive Board (MYK).

Meanwhile, it is asserted that Kılıçdaroğlu will not include members with whom he had disputes in the Party Assembly (PM) and MYK, which will be renewed after the congress. Several media outlets alleged that whether Kılıçdaroğlu, İnce or any other possible candidate is elected CHP leader, names in the forefront of the CHP will see a significant change.
Last Update: Aug 24, 2014 4:22 pm
RELATED TOPICS