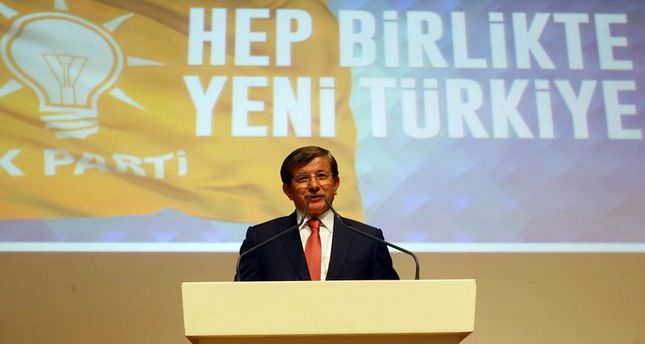 by AA Aug 22, 2014 12:00 am
A former academic, Ahmet Davutoğlu has served the Justice and Development Party faithfully since 2002, as an adviser to prime ministers Abdullah Gül and Recep Tayyip Erdoğan and, for the past five years, as foreign minister.

It was in this role that he emerged as one of the party's leading figures, steering Turkey to a more central position on the regional and global stage.

As foreign minister of the country bridging Europe and Asia, Davutoğlu wanted to transform Turkey into not only a regional power but also a global power.

Born in the central Anatolian province of Konya in 1959, Davutoğlu suffered the loss of his mother at the age of four but has emerged as a world-renowned diplomatic figure over the past decade.

Even before his promotion to the foreign ministry, he was a prolific writer on foreign policy issues with books published in Turkish, English, Japanese, Portuguese, Russian, Arabic, Persian and Albanian.

This culminated in him placing seventh on Foreign Policy magazine's 2010 list of the top 100 global thinkers, citing his role as "the brains behind Turkey's global reawakening."

During his political life he has been centrally involved in the 40-year-old Cyprus conflict, the dispute between Turkey and Armenia, as well as the seemingly intractable feud between Palestinians and Israel.

In Cyprus, he supported Kofi Annan's 2004 peace plan that saw the Turkish Cypriots agree to a federal system, only for Greek Cypriots to vote overwhelmingly against the proposal.

In another diplomatic hurdle close to Turkish hearts, Davutoğlu was involved in negotiations on establishing ties between Ankara and Yerevan in 2007, only for the agreement to fail due to Armenian intransigence.

Since 2002, Turkey has played a key role as a mediator in the Israel-Palestine conflict with Davutoğlu bringing the two sides together for a peace conference in Ankara.

He also played a role at the heart of Turkey's efforts to resolve sectarian violence in the Muslim world between Sunni and Shiite factions, particularly in neighboring Iraq and Syria, as well as wielding influence in Serbia's disputes with Bosnia and Kosovo and over cross-border tension between Afghanistan and Pakistan.

During Davutoğlu's period near the top of government, Turkey's representation overseas has grown significantly, with the number of diplomatic missions rising from 163 to 221 over the last 12 years.

Furthermore, Turkey has developed its Africa policy, extending an open hand to the continent to secure valuable commercial contracts. The number of Turkish embassies in Africa has nearly tripled, while 28 African nations are now represented in Ankara.

Perhaps more than any other foreign policy issue, European Union accession has dominated Davutoğlu's time in power. Turkey began negotiating in 2005 and has been working hard to secure membership. At the end of last year, Turkey signed an agreement to allow visa-free travel in the EU for Turkish citizens.

However, Davutoğlu's pet project has always been humanitarian diplomacy, in particular the human suffering unleashed by the U.S.-led invasion of Iraq and the Arab Spring.

Accordingly, the Global Humanitarian Aid Report ranks Turkey as fourth in a table of contributor countries to its emergency humanitarian fund, and Turkey spent more than $1 billion on relief projects, mainly aimed at Syrian refugees, in 2012.

Davutoğlu's appointment as foreign minister was seen as a fresh start for Turkey's foreign policy.

He also highlighted Turkey's role in the region and the importance of political, economical and security relations with neighboring countries at the highest level.

Davutoğlu explained the term "proactive and preventive peace diplomacy" as "taking the necessary precautions before a crisis occurs or reaches a critical level."

He showed what "rhythmic diplomacy" means by being active in prominent international platforms such as the United Nations Security Council, NATO, Association of Southeast Asian Nations and the African Union.

Turkey's role and efforts to prevent humanitarian tragedies that followed the "Arab Spring" has been frequently acclaimed during the Davutoğlu era.

He has often stressed Turkey's position to extend its helping hand to everyone without discriminating by religion, sect or ethnicity. Turkey's foreign humanitarian aid has seen a massive increase as part of Davutoğlu's active foreign policy.

In 2012, he was listed by Time magazine among the most influential people of the year.

Former U.S. Secretary of State Hillary Clinton described Davutoğlu in her memoir "Hard Choices" as "a person who brought passion and wisdom to his post."

Davutoğlu speaks English, German and Arabic and is the author of many articles and books about foreign policy, international relations, political science and history.