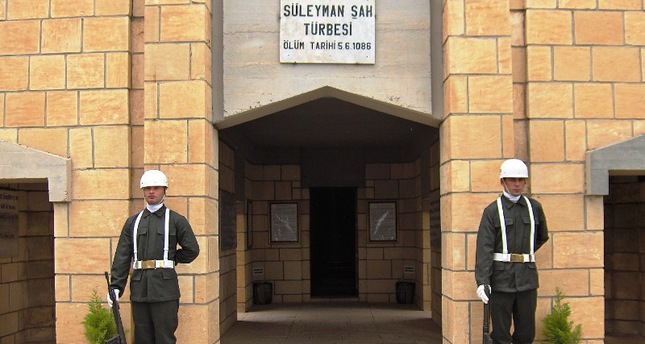 Dismissing the allegations that ISIS is offering the release of the 49 consulate captives in exchange for the Tomb of Suleiman Shah, FM Davutoğlu warned media outlets to avoid groundless, speculative publishing

Allegations about the Islamic State of Iraq and al-Sham (ISIS) offering the release of the 49 consulate captives in exchange for the Suleiman Shah Tomb in Aleppo to be cleared of Turkish troops, was denied by Turkey's Foreign Ministry on Thursday with a written statement. By means of a treaty signed in the early 1920s, Turkey controls Suleiman Shah Tomb in northern Syria as a sovereign exclave with armed forces permanently stationed around the historic monument.

The Gülen-affiliated Taraf newspaper, claimed on Wednesday that Ankara was considering the proposal put forward by ISIS and was readying to withdraw Turkish troops from the territory where the 928-year-old Suleiman Shah Tomb lay, in return for the release of the Turkish diplomats of the Mosul consulate who were seized by ISIS in June.

Turkey's Minister of Foreign Affairs released a statement denying the claims deeming them as groundless and irresponsible. Foreign Minister Davutoğlu asserted the rootless allegations as "precedents of irresponsibility" as the statement read, "in such a sensitive issue, people ought to act in accordance with journalistic and press ethics and misleading public opinion by unwarranted, irresponsible and speculative publications, must be avoided." Davutoğlu invited all media associations to show sensibility towards such a critical issue. He also underlined that all governmental institutions were exerting to bring all 49 members of the consulate home to safety.

Ankara also warned media organs to act in accordance with journalism ethics and to avoid groundless, speculative and irresponsible publishing on such a sensitive issue. Islamic State - which has occupied large swathes of Northern Iraq - has in the past threatened to attack the tomb as it tries to gain control of the area. NATO member Turkey had said it would retaliate if the tomb came under attack.

Furthermore, Taraf newspaper alleged that three weeks had been given to Turkey to withdraw its troops and that Turkey's general staff ordered an evacuation of the area. Taraf reporter Hüseyin Özay has previously written controversial and delusive pieces, in which allegations for all cases had been refuted by the accused parties. In his report on July 25, he had claimed that the son of a professor that writes pieces about taxation made a $200 million (TL 434 million) fictitious export between the K.Maraş and Dubai line. However, Şükrü Kızılot from the Turkish daily Hürriyet refuted this claim with a five-point explanation in his column the next day. Again, Özay's report about Koç conglomerate, one of the biggest holdings in Turkey, reported on Sept. 26, 2013, had also been disproved with a statement made by the Ministry of Finance on the same day. Now his assertion about the Suleiman Shah Tomb makes Özay's attempt meaningful at the time when AK Party's new chairman will be identified.

Parallel to this report by Özay, Taraf newspaper recently claimed that 49 personnel in Mosul's Turkish consulate had waited until the presidential election of Aug. 10 before enacting the exchange to bring in more votes for President-elect Recep Tayyip Erdoğan. Contrary to what Taraf claimed, no exchange was witnessed just before the election.

Likewise, before the local elections the newspaper had asserted that Turkey may go to war with Syria on the pretext of the tomb's critical situation in the Syrian civil war. After all the elections were finalized not even a close encounter eventuated with Syria. Suleiman Shah Tomb is the exclave of Turkey settled on the Euphrates riverside in Manbij District. Under the Treaty of Ankara signed with France in 1921, Turkey claimed the right to deploy soldiers in the territory and permanently guard it. The almost 11,000 square meters of territory hosts the graves of Suleiman Shah, the grandfather of Osman I (founder of the Ottoman Empire) and his two bodyguards.
RELATED TOPICS