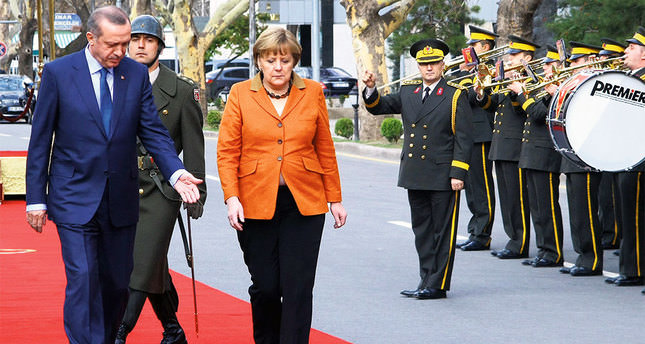 While German officials try to legitimize spying activities on Turkey and German media outlets offer reasons for eavesdropping, the repercussions of the scandal demonstrate that there are new signs that could harm bilateral ties between the two NATO allies

According to a report published by several media outlets on Friday, Kılıçdaroğlu and Tekin met with BND agents in Germany in 2010 just before the leaking of a sex tape that forced CHP Antalya Deputy Deniz Baykal to resign from his post as chairman of the party in 2010.

Prime Minister Recep Tayyip Erdoğan's statements in 2011 about German foundations' actions in Turkey have come up again. In 2011 Erdoğan emphasized that he had found several German foundations' financial actions suspicious and said that there were cash flows between German foundations and CHP municipalities, the PKK and some other nongovernmental organizations (NGO).

Erdoğan's spoke about the likely unsavory business of German foundations pointed to the murder case of Necip Hablemitoğlu in 2002, an academic at Ankara University who was working on a book related to German foundations at that time.

In his book, Hablemitoglu accused German foundations in Ankara of spying and having close contacts with "state enemies," such as ecological, Kurdish or fundamentalist Islamic groups. He described German foundations as "centers of agitation against Turkey" and said that the foundations were supporting protests against the use of cyanide "to the advantage of Germany." He also claimed in his book that German governments allocated billions of dollars for those foundations in Turkey to backhandedly fund the PKK. Hablemitoğlu also emphasized a secret meeting of former German Minister of Justice Herta Daubler-Gmelin and the CHP's Beşiktaş District Mayor Nilüfer Mete at that time. Reportedly, a BDN-affiliated special team consisting of nine people entered Turkey at Istanbul Atatürk Airport with diplomatic passports, three days before Hablemitoğlu's assassination. Nevertheless, the assassination of Hablemitoğlu remains a mystery.

Meanwhile, Hablemitoğlu also wrote a book called "Köstebek" (Spy) that was published after his assassination. In his book, Hablemitoğlu points to the hostile view of the Gülen Movement, led by the U.S.-based imam Fethullah Gülen, toward the Turkish Armed Forces (TSK). He also remarked that the Gülen Movement set a course to infiltrate the police and National Intelligence Organization (MİT) because of their hostility and fear of the TSK. Furthermore, he emphasized that Gülen sees the Police Department as an alternative power that can be used against the TSK. It is alleged that just days before his assassination Hablemitoğlu met with Mustafa Özcan who, it was claimed at the time, was head of the Gülen Movement in Turkey. According to a statement in the book about this meeting, Özcan offered money to Hablemitoğlu not to publish his book "Köstebek."

Despite the commercial, economic and cultural ties between Turkey and Germany, bilateral relations between the two countries these latest developments and accusations may throw a damper on the burgeoning ties unless German officials provide a satisfactory explanation concerning the latest scandal.