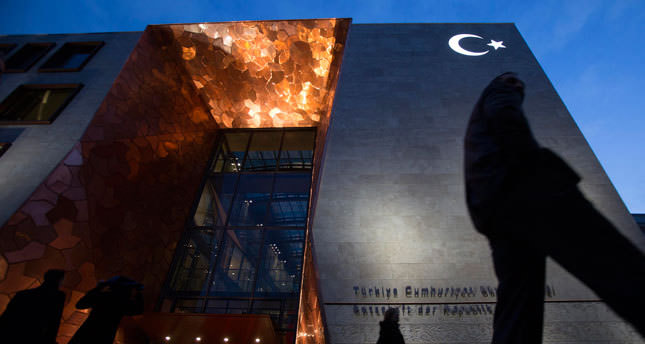 by Daily Sabah with Agencies Aug 24, 2014 12:00 am
Germany's foreign intelligence agency has been spying on Turkey for nearly four decades, Focus magazine said Saturday in a report which could raise tensions further between the NATO allies. The details about the duration of possible surveillance and on the decision-making surrounding it go further than first reports earlier this week.

Turkey summoned Germany's ambassador in Ankara on Monday after media reports that Berlin had identified Ankara as a top target of surveillance in a government document from 2009 and had been spying on Turkey for years. Focus magazine said the BND intelligence agency had been spying on Turkey since 1976 and that the German government under the then Social Democrat chancellor Helmut Schmidt had expressly approved the step.

The magazine also cited government sources as saying the BND's current mandate to monitor Turkish political and state institutions had been agreed by a government working group. That included representatives of the chancellor's office, the defence, foreign and economy ministries. A spokesman for the German government declined to comment on the report.

The report is a further embarrassment for Angela Merkel's government which faces accusations of hypocrisy because of its outrage over allegations of widespread surveillance by the U.S. on Germans, including the tapping of the chancellor's phone.

However, conservative lawmaker Hans-Peter Uhl told Focus there were "good reasons" for the BND to bug Turkey. "We need to know what is coming to us from EU-applicant Turkey," Focus quoted him as saying.

During a telephone conversation with Turkish Foreign Minister Ahmet Davutoğlu, German Foreign Minister Frank-Walter Steinmeier said his government is investigating the reports of BND's spying on Turkey. "I have explained our concerns to my German counterpart. We are expecting a detailed, satisfying explanation. We'll analyze the situation after their explanation," Davutoğlu said.

Germany is Turkey's largest trading partner in the EU and home to at least 3 million Turks. But relations are not always smooth. Merkel's conservatives are sceptical about Turkish EU membership.

Der Spiegel quoted Turkey's former deputy head of government Ertuğrul Yalçınbayır as saying his country had long suspected they were being spied on by Germany and other nations. "Now we need a no-spy deal," he said.

Germany had demanded a no-spy agreement with the U.S. after media reports about U.S. spying in Germany but so far Washington has resisted. Merkel has also said spying among friends is "not at all acceptable."

In a public spat which chilled relations between Berlin and Washington, Germany told the top U.S. spy in Germany to leave earlier this year after a double agent at the BND was unearthed.

Der Spiegel magazine reported that the BND has also targeted Albania, another member of NATO, for surveillance.