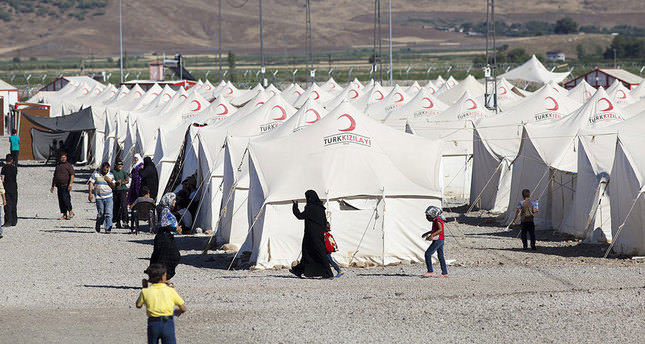 Conditions of Syrian refugees were discussed in a meeting held by the participation of many ministers, authorities from the army and national intelligence in Ankara. In the coverage after the meeting, society is called upon not to deceive provocations about exceptional cases, although the crime rate is quite low in apopulation of over 1 million Syrian

Assembled under the chairmanship of Deputy Prime Minister Beşir Atalay, a 7-hour lasting meeting's coverage was announced in which Syrian refugees current situation and the precautions needed to better their situation was discussed.

Before the meeting, officials responsible for the coordination of refugees and deputy Prime Minister, BeşirAtalay underlined the fact that cases being reflected to the press about Syrians are quite negative lately. Atalay also stated that Turkey hosts 220.000 Syrians in the refugee camps of 1.360.000 Syrian refugees in Turkey, since the Syrian civil war has lasted four years and over $3,5 Billion was spent for the aids until today.

According to the coverage, activities carried out by Turkey for the Syrians, the present problems and precautions were amongst some fo the topics discussed. Moreover issues of health, education, security, economy, legal regulations, smuggling and society's psychology related to Syrian refugees were discussed in detail as stated in the coverage.

"Aid operations and high level of coordination between institutions carried out by Republic of Turkey's all institutions, associations and civil society organizations for more than three years, serves as a model for other countries in the World." said in the coverage and stated that Turkish society's embracing their Syrian brethren and using every means available to help them, must be appreciated.

In the statement, it is also emphasized that there are some provocations with a heavy disinformation which aims to incite xenophobia and discrimination. "By concerting actions of state institutions and civil society organizations, current works will be intensified for striving against these issues." indicated in the statement.

Increasing reactive attitudes towards Syrians and the concerns as a result, were also criticized in the statement by these words: "Contrary to what is believed, the rate of Syrians getting involved to judicial incidents and the rate of crime among them is quite low. However, any case might be repercussive in the press by the influence of separatist perspective."

Coordination between Turkish Armed Forces (TSK) and Minister of Interior Affairs also praised in the coverage by given details: "The issue of border security and striving against smuggling, a remarkable development is provided especially in the last yearby these institutions [TSK and Minister of Interior Affairs] and things will be carried out for satisfying the whole needs. A significant development is witnessed in officially recording of Syrians, 740.000 Syrians biometrical record has been done. The ones who remained will be finished in a few months." remarked in the statement.

"Works for sending Syrian children to the school will be widened and people will be encouraged for learning Turkish language by enhancing the opportunities. Furthermore, homeless Syrians are identified then, directed to temporary centers of sheltering by civilian administrations and local authorities. Urgent and basic healthcare for Syrians will be sustained; expert medical staff will be reinforced to places where services got more intensified.These practices will maintain." as the coverage said.

It is also underlined that every work for Syrian refugees will be supervised punctiliously and any malfeasance will not be allowed.