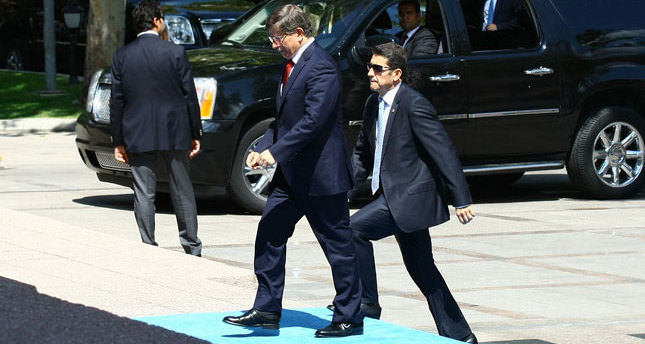 by Daily Sabah Aug 25, 2014 12:00 am
The 62nd government of Turkey, which will soon be formed under the leadership of Ahmet Davutoğlu, is expected to focus on five crucial goals with special emphasis on the new constitution and transforming Turkey into a powerful global actor through the implementation of groundbreaking reforms.

As Turkey prepares to form a new government following the election of Prime Minister Recep Tayyip Erdoğan as president, details of Davutoğlu's programs and projects for the upcoming government are being revealed. While Davutoğlu is planning to focus on expanding Turkey's global power and reputation abroad, he is also expected to continue to work on the reconciliation process, fight agents of the Gülen Movement who have infiltrated Turkish state institutions and improve employment opportunities in the Turkish job market.

With the aim to make Turkey an important regional and global player, the new government will try to ensure that Turkey takes a more active role in global problems. For instance, Turkey is planning to undertake a more effective and active role in the Syrian, Iraqi and Palestinian conflicts while it will continue to work towards its EU membership – a 50 year old journey – and will implement more reforms in accordance with EU standards to achieve this goal. This approach was also present when Davutoğlu served as the foreign minister under Recep Tayyip Erdoğan's cabinet, and was referred to as the "zero problems with neighbors policy." Here, Turkey tried to improve relations with all its neighboring countries in efforts to ensure peace in the region, while it has also implemented numerous reforms in accordance with the EU, some of which have already been entrenched in the daily lives of Turkish citizens.

Another crucial aspect that the new government will focus on is the dire need for a new constitution and will continue to find common ground regarding the matter until the 2015 general election. Accordingly, a framework will be established to determine the principles. These will be based on individual freedoms, the protection of national unity and values, accepting multiculturalism as richness. Pluralism will be highlighted rather than a single view and will be comprehensively framed under all features regarding the rule of law.

On the other hand, the reconciliation process, which has been taking place between the Turkish government and the Kurdish people, will proceed and more legal reforms and regulations are expected to be made to take the reconciliation process a step further and establish permanent and durable peace while ensuring minority rights. This process is also expected to open up more chapters and opportunities for other minorities in Turkey including Alevis, non-Muslims and people from different ethnicities.

Fighting against Gülenist infiltration in Turkish state institutions is another crucial aspect. Erdoğan has consistently touched upon the movement and Davutoğlu has reiterated the notion that he will continue to rid state institutions of such agents. Likewise, the new government will fight against organized crime networks, gangs and others who pose a threat to Turkey's national safety and security.

The economy is also expected to be one of the highlights of the new government. Policy will focus on providing more jobs for the people while ensuring economic growth. An important feature of the new policies will ensure that the economy will no longer be tied to the fluctuating interest-stock market-foreign currency triangle while prioritizing production.

Officials note that Davutoğlu's government will continue to build on Erdoğan's legacy and work cohesively to establish a "New Turkey" completely free from the chains imposed by its predecessor, Old Turkey.