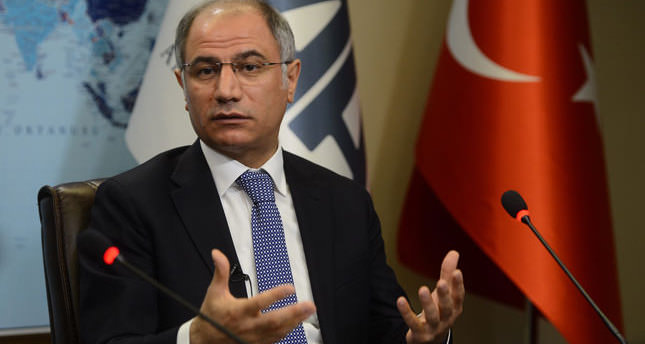 Speaking to Daily Sabah, Interior Minister Efkan Âlâ dismissed the allegations that Turkey lost its reformist image in the past several years, and stated that the ruling AK Party will carry on its reforms at full steam to become an advanced democracy

Operations within the law enforcement are silently continuing with the accusation of wiretapping and espionage. On the other hand, while the preparations of the reconciliation process' road map is proceeding, we have witnessed actions that could be defined as provocations in the last week. Daily Sabah spoke to the Internal Affairs Minister Efkan Âlâ who highlights Karl Popper's Open Society regarding the institutionalization of democracy in Turkey, about the ongoing operations of Gülenists within the law enforcement, labeled the "parallel structure," and the reconciliation process.

In the last few days, there were operations within the law enforcement regarding wiretapping and espionage. What are the justifications for these operations, and could you inform us of the latest developments?

We are facing a large-scale espionage activity which endangers Turkey's national security. The presidency, prime ministry, many of the ministries, intelligence agency, public security agencies, political party headquarters, and prominent businessmen were wiretapped. Turkey's legal humanitarian aids are shown as being affiliated with illegal and terrorist organizations by a group which infiltrated the state. People who assaulted Turkey's national security are standing trial. Turkey is continuing its struggle against these criminals within the boundaries of the law.

What is the evidence that proves these criminals are affiliated with Gülen's organizations?

We are finding and trying the people positioned in the law enforcement, jurisdiction, and bureaucracy who are responsible for illegal actions. While the legal action continues, we are facing slander and resistance from the same source. The fact that they were controlled from the same center was a 'known secret'. The state is investigating all of the allegations meticulously and in regards of being a democratic constitutional state.

There are allegations that these investigations have transformed into a witch hunt. How do you evaluate these allegations?

These are only slanders, black propaganda. Turkey's law enforcement consists of 260,000 personnel. Only 2,000 personnel were investigated with the accusation of being affiliated with this illegal organization, and only 1,000 have we filed a criminal complaints against. At the moment, 68 of the personnel were discharged due to their crimes.

The numbers of these operations which show that not even 1 percent of the law enforcement was involved, is the indication that this is a struggle against criminals within the organization. The accusation that the investigation has transformed into a witch hunt reveals the mind-set of the parallel structure and the media which acts as their spokesman. The documents we have found in our investigations exposed that they have fabricated crimes, affiliating these crimes with people who haven't done anything wrong. They were prepared for what they accuse us of; a witch hunt. I don't find their description of investigations which are held in the boundaries of law, surprising.

Are there challenges when you take on this criminal organization?

Criminal organizations will do anything to realize their aims, however, the state has to act in the boundaries of law. First, you have to find criminal evidence, then the criminals, and lastly, you deliver the evidence to the court.

Such organizations see Turkey as a threat to themselves, due to the fact that Turkey is quickly becoming an open society, and they will not be able to receive illegal income. As for the other organizations which rely on problems in Turkey, they eventually will become history.

Turkey is determined to establish advanced democracy, and our people show this determination with their increasing support to the government.

As a person who served in the bureaucracy and witnessed the reforms firsthand, how do you evaluate the allegations that Turkey has lost its reformist identity and is becoming a more authoritarian state?

Can you show any regression in any field since the AK Party come into power? Especially regarding the democratization, Turkey made indisputable progress. We can give many examples in this context, such as the reconciliation process, EU accession, and freedom of thought. The AK Party officially started the negotiations to EU accession. The AK Party provided the right of individual communication to the Supreme Court regarding fundamental rights and freedoms. The AK Party provided the right for the people to directly elect the president.

The AK Party's top priority is to prepare a new constitution which will carry Turkey onward to become an advanced democracy.

Because constitutional reform requires political majority. If the AK Party had this majority, a new constitution would already be ready. We want to prepare the new constitution which will be based on fundamental rights and freedoms, with the power lended to us by the people, after the elections next year.

In a previous statement, you said that Prime Minister Erdoğan's Davos speech in 2009 was effective in activating the parallel structure. Could you please clarify this?

When you look at the documents, wiretapping and filing starts right after this incident. Political assaults against Hakan Fidan, the head of the National Intelligence Organization [MİT], begins to happen. After these, the Gezi Protests and, lastly, Dec. 17 and Dec. 25 operations took place. The parallel structure is cooperating with some international organizations, this much is clear. Our investigations also reveals this.

While there is an economic crisis all around the world, the tenders for the Third Airport which has 150 million passengers/year capacity, Third Bosphorus Bridge, and Nuclear Power Plant were held in the same year, and they were done within the model of "buildoperate- transfer." All of the tenders were live broadcasted on TV. This shows the international markets' trust in Turkey. In the same year, the Marmaray Project, which connects Europe and Asia beneath the Bosporus was completed. The last payment of the IMF debt was paid. Economic indicators have reached an alltime high in Turkey.

In the same period, important steps have been taken in the reconciliation process. Prohibitions neglecting the freedom of religion and conscience were abolished, freedoms were extended. A total of 1,014 properties belonging to minority foundations were given back and requital of 21 real estate was paid.

It is not surprising that there are assaults on stability and coup attempts in a period which is full of positive developments.

While preparations for the reconciliation process' road map are proceeding, we have witnessed actions which can be defined as provocations in the last week. How do you evalute this?

While important issues such as this are being resolved, provocations are inevitable. To solve this issue, which neglects Turkey, the political will took the initiative. With the ongoing democratization done by the AK Party government, the support to the terrorist organization in the region has declined considerably. Decisions of which steps are to be taken, are mostly made, and we will inform the roadmap with the public soon, most probably in this autumn.

There may be provocations today as there were in the past, however, there is tremendous support from the public for the reconciliation process, therefore, the provocations will not yield any result.

As a politician who consistently mentions "open society" in his statements, what do you mean when you say "advanced democracy?"

Turkey continues its journey as a stable country in a rather unstable region. The members of a political movement who define themselves as conservative democrats have been reforming the country since 2002. We are an Islamic state which advances its democracy. Turkey's successes set an example for all of the countries in the region. Due to this, its numbers of enemies as well as its friends are increasing. Our ultimate aim is advanced democracy which is democracy of rights and freedoms.

Turkey is determinantly moving forward with political and economic reforms to build a transparent democracy which aims development and prosperity.

Lastly, how do you evaluate the allegations in the international press that Turkey supports some terrorist organizations?

These are not allegations, just slander. Turkey is a country which knows terrorism and has suffered greatly from it for many years. Turkey is in the fight against international terror. These are all disinformation, lies which are the product of the disgruntled by Turkey's initiatives in stopping the terror. On the contrary, Turkey is cooperating with international organizations and other countries to prevent terrorism.

He graduated from the Istanbul University Faculty of Political Science. He served as the governor of the Batman and Diyarbakır provinces, and stood out due to his close relations with the people during his governance. Âlâ was also appointed undersecretary of the prime ministry, he has been the internal affairs minister of Turkey since December 2013.
Last Update: Aug 25, 2014 1:19 am
RELATED TOPICS