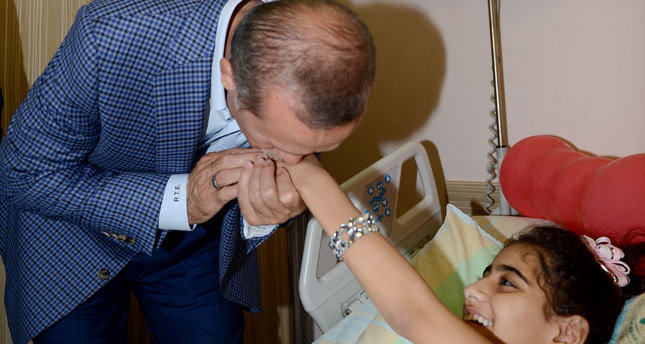 by Daily Sabah Aug 25, 2014 12:00 am
Turkish president-elect Recep Tayyip Erdoğan paid a visit to Palestinians from Gaza on Sunday who are being treated in Turkey for injuries they suffered during Israel's brutal offensive in the Gaza Strip.

During his two-hour visit in Yenimahalle State Hospital of Ankara, Erdoğan met 20 survivors of the Gaza attacks including five children. Ankara has 27 injured Palestinians in four hospitals. Turkey received 23 more Palestinians injured in attacks last week, bringing the total number of injured brought to Turkey for treatment to 48 since early August. The country plans to bring at least 150 other wounded Palestinians in for treatment, through airlifts from Israel by military planes.

At least 2,109 Palestinians, mostly civilians, have been killed and more than 10,000 others injured in Israeli attacks since July 7, according to the Palestinian Health Ministry.

Turkey also delivers humanitarian aid to Gaza where many houses were razed to the ground in Israel's military attacks, which have left thousands homeless. The country already delivers food, medicine, medical equipment and other basic amenities to Gazans.

Erdoğan is one of the harshest critics of Israel in the international community. His rhetoric against Israel's state policy, that indiscriminately targets Palestinians in the name of wiping out the Hamas faction, strained once-good relations between Turkey and Israel.