Merkel backs spying on Turkey, says her criticisms were for 'ally' US 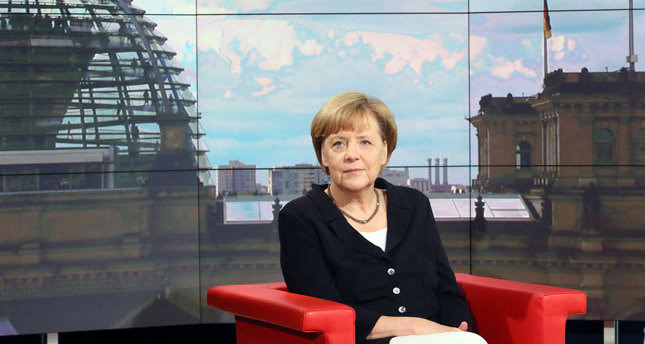 by Daily Sabah Aug 26, 2014 12:00 am
After media reported in 2013 that U.S. intelligence monitored her cellphone, German chancellor Angela Merkel stated that "eavesdropping is unacceptable between allies." When her words were repeated back to her but in regards to Germany's alleged spying on Turkey, Merkel responded that her words were for the U.S., not Turkey. "Those words of mine were said in the context of U.S. activities.

This context is essential. Furthermore I can say that BND is responsible for collecting all the information in terms of our security. Inside the country, this is being done by the Federal Office for the Protection of the Constitution (BfV). In the light of increasing threats, we still depend on activities of intelligence services. I believe that everyone will understand this," Merkel told press on Sunday.

Merkel's latest statement clearly defines NATO ally Turkey as an "unfriendly" country was a truly unexpected development for Ankara, experts say. After the breakout of the spying scandal, Turkey summoned Germany's ambassador in Ankara Eberhard Pohl and Turkey has called Germany's spying on Turkey "unacceptable." "This is a grave situation that needs to be explained by Germany if there is slightest truth to these allegations. Such practices in relations among friends and allies, which should be built on mutual trust and respect, are in no way acceptable," the ministry said last week in a statement.

Sources also said last week that the heads of the German and Turkish intelligence services agreed to meet soon to discuss the allegations, however neither the Turkish Intelligence Agency (MIT) nor the German BND have made an announcement regarding the meeting yet. Despite Berlin's hypocrisy, Ankara still has not released a protest note but, according to diplomatic sources, Berlin hopes that the Turkish government will not make an international row out of it. The German government decided last month to deport representatives of the U.S. intelligence agencies in Berlin.
RELATED TOPICS