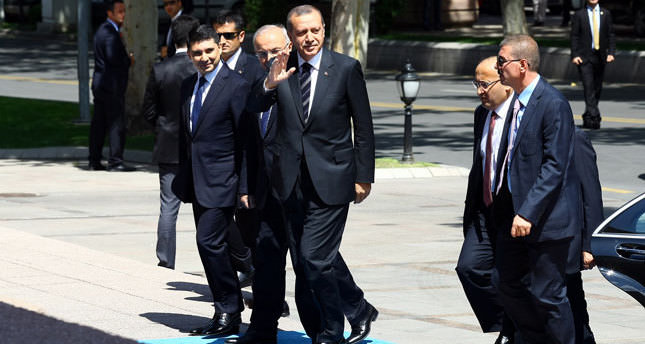 President-elect Recep Tayyip Erdoğan chaired for the last time as prime minister the cabinet meeting of the 61st government held on Aug. 25 where national and foreign political agendas were discussed

While getting ready to take his new seat as Turkey's first directly elected president, Prime Minister Recep Tayyip Erdoğan chaired a cabinet meeting for the last time on Monday. Erdoğan chaired the final cabinet meeting of the 61st government as prime minister in which several issues were addressed by cabinet ministers. The main topics discussed were the situation of Turkish hostages held by the Islamic State of Iraq and al-Sham (ISIS), Israeli aggression toward Palestinians in Gaza and the Kurdish reconciliation process that aims to end the decades-long conflict in country's southeast.

It was also the last cabinet meeting for Ahmet Davutoğlu as foreign minister as it is highly expected that he will be selected as the new prime minister after the extraordinary party congress on Wednesday. He attended consecutive meetings in order to maintain his preparation to form the 62nd government with several ministers, high-ranking bureaucrats, and state officials over the weekend.

One of the main subjects discussed in the cabinet meeting was the ongoing Kurdish reconciliation process. Members of the government discussed their efforts to finalize the tripartite road map. Last week, Deputy Prime Minister Beşir Atalay, who is in charge of coordinating the reconciliation process, had shared early details of the road map with media outlets in Turkey and said that the Turkish government will announce the final form of the road map by September. The road map includes three steps: the disarmament of the PKK, creating a legal framework for the process, and finally returning and rehabilitating PKK members. Furthermore, cabinet members spoke on Turkey's fight with the Gülen Movement. They said the government is determined to maintain the judicial process against those involved in wiretapping actions.

Also, the recent developments in Iraq were evaluated by the cabinet - it was decided to adopt several courses of action toward Iraq for both Turkey and the region's security and stability. On top of that, the cabinet discussed humanitarian conditions in Gaza and the government's determination to maintain its humanitarian aid to Palestinians.

Meanwhile, Davutoğlu, who is expected to be Turkey's new prime minister and form the new government after the Justice and Development Party's (AK Party) extraordinary party congress on Aug. 28, attended consecutive meetings with ministers including Deputy Prime Minister Ali Babacan, Minister of Development Cevdet Yılmaz, and high-ranking bureaucrats. On Friday, Davutoğlu and his team worked late Friday for the preliminary preparation for writing the 62nd government's program. During the weekend, Interior Minister Efkan Ala, Babacan, Chief Advisor Yalçın Akdoğan and AK Party Group Deputy Chairman Nurettin Canikli gathered at AK Party headquarters in Ankara under the chair of Ahmet Davutoğlu. Reportedly, the early draft of Davutoğlu's program was written with the contribution and consultancy of the group that gathered at the headquarters.
RELATED TOPICS