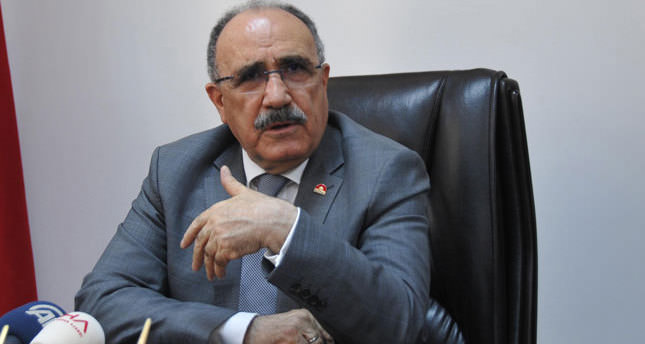 by Daily Sabah Aug 26, 2014 12:00 am
Steps to facilitate the reconciliation process between Ankara and Kurds that started with a Justice and Development Party (AK Party) initiative continue to be taken under the coordination of Deputy Prime Minister Beşir Atalay.

Atalay said that the objective of the process it to ensure the return of PKK militants, who took up arms against the Turkish government to create an independent state in southeastern Turkey, while talks with PKK leader Abdullah Öcalan, who has been imprisoned on İmralı Island, talks at Mount Qandil, the PKK headquarters in Iraq and the European Kurdish diaspora have been continuing.

Reportedly, the secretariat will be responsible for recording talks with Öcalan, PKK leaders at Mount Qandil and representatives of Kurds in Europe, and coordinating the return of militants by working with Ankara and Irbil. An office at the Khabur border crossing between Turkey and Syria is planned to be established for officials carrying out field study.

Sources said that the PKK is not willing to disarm due to the Islamic State of Iraq and al-Sham's (ISIS) threat in the Middle East. That is why the disarmament process of the PKK is scheduled to start in Turkey only.

As part of the reconciliation process, for those who live in PKK camps and decide to return to their families, social life and politics will be secured by the law. A legal amendment regarding the issue is planned to be finalized by the end of 2014.

As the first step, nearly 1,000 former PKK members who have continued to live in cities such as Irbil and Sulaymaniyah will be able to return to Turkey. For PKK militants who live in Europe, a faster returning schedule is on the table. Considering social sensitivity, there is a different plan for PKK leaders such as the PKK's number-two man Murat Karayılan.

In the talks held at İmralı Island by state officials, both sides agreed to use terms such as "social integration" and "returning home" instead of "amnesty" or "effective remorse."

Last week, a summit was held regarding the reconciliation process, which was held under the leadership of Atalay. Officials agreed that certain groups are trying to undermine the process. At the meeting, several steps came stood out: it was agreed that a monitoring board will be established to continue the talks in a serial fashion, officials stressed that the process is of the utmost importance considering the latest developments in the Middle East and they agreed on arranging a calendar to ensure the return of PKK militants.
RELATED TOPICS