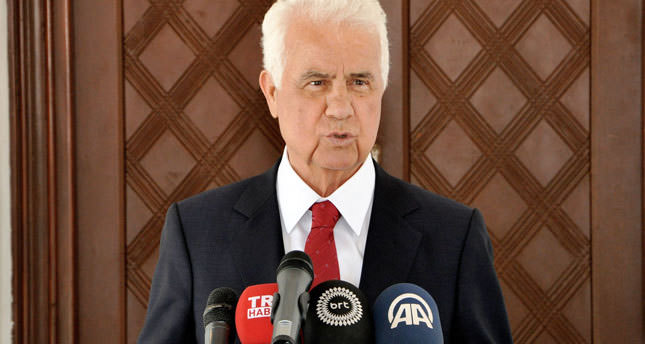 by Daily Sabah Aug 26, 2014 12:00 am
The president of the Turkish Republic of Northern Cyprus (KKTC) Derviş Eroğlu, accused the Greek administration on the island with not siding for a solution and said the Turks are expected to tolerate the unacceptable demands of the Greek side.

Speaking to press on Sunday, Eroğlu said that the solution for the island of Cyprus is not even close as long as the U.S. and European Union see Greek Cypriots as the only legitimate representative of the island, and added that the Greek Cypriots are not trying to settle the decades-long conflict with Turks. "Although Greek [Cypriots] want to be seen as the side that strives to compromise at the table, they demand unacceptable things
in which sovereignty, rights and freedoms of Turks [Cypriots] would be removed. As long as they are seen as the only legitimate representative on the island by Americans and Europeans, Greeks will always be reluctant to the solution because they have nothing to lose," Eroğlu said.

In the interview with Daily Sabah in May, Eroğlu underscored the fact that the sincerity of the Greek Cypriots is the most essential thing for the solution to this issue. He had complained that Greek Cypriots had been acting as though they do not want to assent, and said, "The negotiations have been ongoing these past 40 years, and with the exception of the guarantor countries, every issue has been discussed. By ignoring the past years of negotiations, the Greek Cypriots are playing for time. However, I do believe that if the Greek Cypriots were serious about a peace agreement, this could be implemented on the island in a matter of months."

According to the reports, Greek Cypriot leader Nicos Anastasiades could not keep his temper during the meeting and yelled at the Turkish participants saying, "he discusses only what he wants." Then, he threw his glasses, started smoking and abandoned the meeting leaving his team, the Turkish team and U.N. observers in astonishment.

The Cyprus problem has been on the agenda for the better part of the 40 years. After the Greek Cypriot side rejected the 2004 U.N. Annan Plan, negotiations had continued fruitlessly for years. After a two-year hiatus, negotiations were resumed and bilateral talks - which had come to a standstill - were expedited last February. However, the reluctance of Greek Cypriots may bring inertia to the talks as Derviş Eroğlu mentions.
RELATED TOPICS