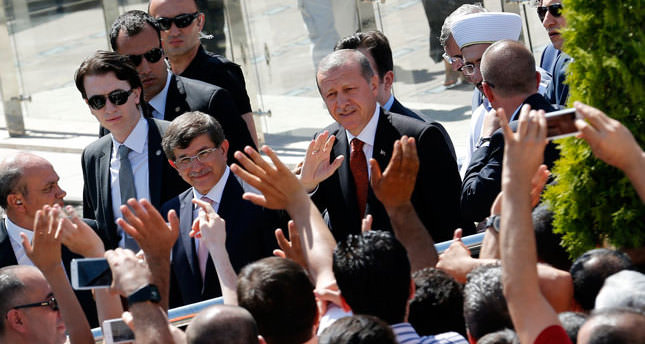 The ruling AK Party government will hold its first extraordinary congress to elect nominee Ahmet Davutoğlu as its chairman, who will form Turkey's 62nd government as the next prime minister

Turkey's ruling AK Party will have its extraordinary congress to elect the next chairman, who will also be the next prime minister of Turkey with the participation of around 30,000 people including AK Party supporters, delegates, journalists and foreign country representatives today in Ankara. After AK Party Chairman Recep Tayyip Erdoğan's election as the county's first president elected by popular vote on Aug. 10, the AK Party's Central Executive Committee (MYK) decided to gather an extraordinary party congress to replace Erdoğan, who will leave his post for the presidency on Aug. 28. Last week the AK Party executive board nominated Foreign Minister Deputy Ahmet Davutoğlu as the candidate for new party leader. An extraordinary party congress will be held for the first time in the ruling AK party's history since 2002. A total of 1,490 delegates from across Turkey are expected to attend the congress to welcome their new chairman to bid farewell to their former leader Erdoğan, who will be the president of Turkey just a day after the congress convenes.

The congress will be followed by nearly 2,000 journalists. On top of that, a huge crowd of AK-party supporters is expected to attend because this congress will also serve as a farewell ceremony to Erdoğan.

The congress will start with President-elect Erdoğan's opening speech. Giving a speech in the AK Party congress will not be considered a problem because Erdoğan has not been officially announced as Turkish president yet. This will be a historical moment for the ruling-party; Erdoğan will give a speech for the last time as an AK Party member. The congress program is planned to continue with a speech on the promises of candidate Davutoğlu. Finally delegates vote for their new leader and the new prime minister of Turkey.

Ahmet Davutoğlu, in the speech he had made after his nomination for the chairmanship of the AK Party by the party MYK, had accentuated three main points which were "rejuvenation," "reconstruction" and "restoration." It is expected that Davutoğlu will touch upon and emphasize the concept of "new Turkey" in today's speech.

The fact that democratic reforms will sustain without deduction is also going to be underlined. Messages about pertinaciously continuing the reconciliation process and making no concessions in fighting the parallel structure will also be orated. Additionally, embracing messages for Alevi citizens and projected reforms about this issue will also be hinted at.

Stability in economic policies without concessions from economic acquisitions gained in the last 12 years will also be mentioned in the speeches. Regarding foreign policy, the goal of membership for the European Union, regional stability and Turkey's role in helping to construct this regional stability is among the matters to be mentioned in the address of Davutoğlu. Meanwhile, a timeline will be shown to the audience about the transformation and development of the AK Party in time, because of the historical place that the congress occupies. The timeline shown to the audience will include all the mottos and all the campaign songs that have been used by the AK-Party since 2002, the year when the AK Party entered its first election.

In the case of an absence of the leading candidate the congress will gather a day after in the same place, however nobody expects this scenario to occur. After the voting process of the delegation is accomplished with majority, the AK Party's new leader, and new prime minister of Turkey will address the crowd.

The congress will then end with a speech by Ahmet Davutoğlu after he is officially elected by the delegates. The 62nd government of Turkey, which will soon be formed under the leadership of Davutoğlu, is expected to focus on five crucial goals with special emphasis on a new constitution and transforming Turkey into a powerful global player through the implementation of groundbreaking reforms. With this objective, the new government will try to ensure that Turkey takes a more active role in world issues. For instance, Turkey is planning to undertake a more effective and active role in the Syrian, Iraqi and Palestinian conflicts while it continues to work towards its EU membership - a 50-year-old journey - and will implement more reforms in accordance with EU standards to achieve this goal. This approach was also present when Davutoğlu served as the foreign minister under Recep Tayyip Erdoğan's cabinet and was referred to as the "zero problems with neighbor's policy."

Here, Turkey tried to improve relations with all its neighboring countries in efforts to ensure peace in the region, while it has also implemented numerous reforms in accordance with the EU, some of which have already been entrenched in the daily lives of Turkish citizens.

Another crucial aspect that the new government will focus on is the dire need for a new constitution and it will continue to find common ground regarding the matter until the 2015 general elections. On the other hand, the reconciliation process, which has been taking place between the Turkish government and the Kurdish people, will proceed and more legal reforms and regulations are expected to be made to take the reconciliation process a step further and establish a permanent and durable peace while ensuring minority rights.
Last Update: Aug 27, 2014 8:22 am
RELATED TOPICS