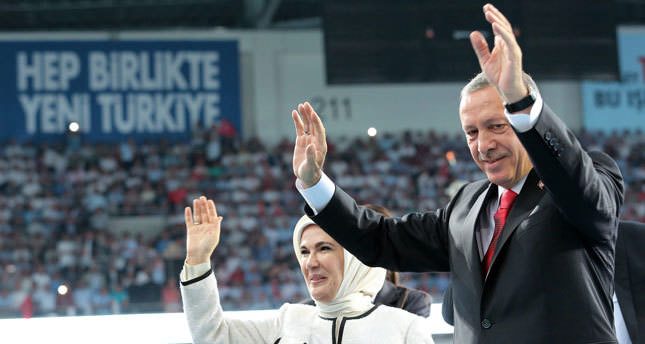 by Daily Sabah Aug 27, 2014 12:00 am
PresIdent-elect Recep Tayyip Erdoğan and the new government led by new AK Party Chairman Ahmet Davutoğlu vowed to "bravely" fight against the Gülen Movement's infiltration of state institutions and that a structure nestled within a state and gangs will never be tolerated in Turkey.

Speaking during the Justice and Development Party's (AK Party) first extraordinary congress on Wednesday, Presidentelect Recep Tayyip Erdoğan stated that the new government led by new AK Party Chairman and Prime Minister Ahmet Davutoğlu, will bravely fight against the Gülen Movement's infiltration of state institutions. "The presidency, our new government and political institution will continue a determined and courageous struggle against treachery in a parallel state [a term used for the Gülen Movement's structure within the judiciary and police department] and bureaucratic tutelage at the same time," Erdoğan said, and added that a parallel state nestled within a state, gangs and mafia-like organizations will never be tolerated in the new Turkey.

Erdoğan stated that the Gülen Movement tried demolishing the legitimate and democratic government by using its power in state institutions, and added that one of the core reasons to nominate Davutoğlu for party chair and prime minister was him showing determination to fight the Gülen Movement by legal means. He also slammed opposition parties for collaborating with the movement and accused them of longing for old Turkey.
Last Update: Aug 28, 2014 1:09 am
RELATED TOPICS