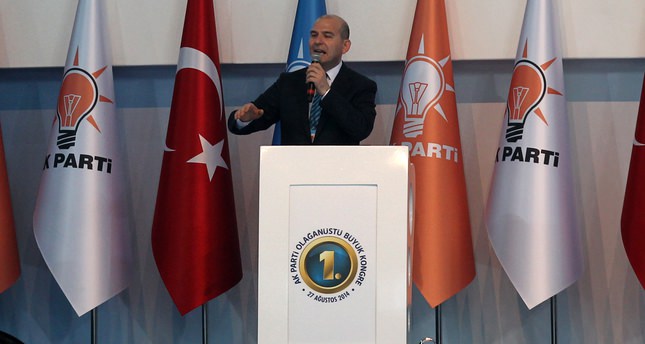 by Daily Sabah Aug 28, 2014 12:00 am
Speaking at the Justice and Development Party's (AK Party) extraordinary party congress held in Ankara, AK Party Deputy Chairman Süleyman Soylu said that President- elect Recep Tayyip Erdoğan is the guide for those who support and contribute to the party's cause. Soylu said, "The AK Party saved Turkish politics and saved it from the sickness of coups for good. Coups and stages are not a way to gain power in this country anymore. The AK Party won all elections through democratic ways and the nation's will. Only the nation is able to decide who will rule the country."

Soylu pledged on behalf of all AK Party members and supporters that they will continue to follow their "leader" Erdoğan no matter what happens.
On Tuesday, AK Party Deputy Chairman and Spokesman Hüseyin Çelik held a press conference and said that the AK Party as a political movement, which has won nine elections, had its turning point with yesterday's extraordinary party congress. Çelik said that the AK Party is not used to extraordinary congresses and added that all congresses that the AK Party has held so far served as a model for Turkey's other political parties. Pointing out that congresses are revisions and a clearance for political parties, Çelik said that what turned the AK Party into a winning and ruling party is that the party has never avoided facing its delegates or voters.

Referring to the opposition Republican People's Party (CHP) extraordinary party congress with its tense atmosphere, Çelik said that there is no chaos and quarrels in the AK Party's congress, but consultation and negotiations. Çelik reiterated that the extraordinary congress was compulsory because Erdoğan was elected by a popular vote as the 12th president of the country.

Pointing out that nearly 3,000 people were invited to the congress, Çelik said 40,000 people including civil servants, businessman, political party representatives, artisans and laborers from 81 cities arrived in Ankara to participate in the congress.