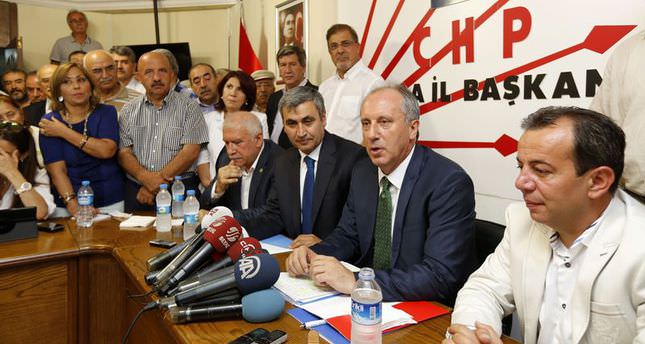 Amid criticism of main opposition CHP leaning toward the right wing, the CHP administration has been preparing a declaration to combat critics as party chair candidate İnce seeks to change party regulations

Former Republican People's Party (CHP) Deputy Chairman and Yalova Deputy Muharrem İnce, who resigned from his post and announced his candidacy for the party chairmanship, yesterday said that he will offer changes to party regulations ahead of the extraordinary party congress on Sept. 5 and Sept. 6 to elect the CHP chairman.

İnce asserted that CHP Chairman Kemal Kılıçdaroğlu is forcing to get their vote and took their signatures saying that delegates would vote for him at the congress and said an amendment in party regulations is necessary ahead of the congress. "There are CHP delegates saying that they will vote for me even though they signed on for Kılıçdaroğlu's chairmanship. I will shatter the fear in this party," said İnce.

Gathering with CHP members in Turkey's northern city of Rize, İnce held a press conference and said, "There is no hope for CHP's ruling the
Turkish nation anymore because the CHP is not determined and consistent."

During İnce's conference, CHP Rize Provincial Chairman Mehmet Aslankaya refused İnce's allegations and said, "No one can scare us. No one asked for our [provincial chairmen] signature." Comparing where the AK Party's extraordinary congress was held yesterday to the CHP's scheduled congress place, İnce said that the CHP administration is holding its congress in a smaller place because they are afraid of İnce's rhetorical skills.

Yesterday, the CHP's Central Executive Board (MYK) also held a meeting amid intra- party conflict. Speaking after the MYK, CHP Deputy Chairman and Spokesman Haluk Koç criticized Recep Tayyip Erdoğan's speech at the AK Party extraordinary congress as the president-elect and claimed that his speech was completely unlawful.

Reportedly, ahead of the CHP's 18th extraordinary congress, the party administration started preparing a declaration to be published at the congress to clarify the main principles of the CHP. Kılıçdaroğlu instructed the party administration to extend the scope of the declaration. It is reported that the declaration's core principles will be based on "equality," "freedom" and "justice." The declaration also aims to create a new party vision that is expected to be based on "removing polarization" and "building a compromising political landscape."

It is claimed that the declaration aims to repel the criticism that the CHP is leaning toward the right. Kılıçdaroğlu is reportedly expected to give seats to members with a right-wing background in the Party Assembly.

Even though Kılıçdaroğlu was accused by opponents in the party of leaning toward right-wingers by announcing controversial candidates in previous elections, certain circles close to the CHP alleged that CHP's Ankara mayoral candidate in the March 30 local elections, Mansur Yavaş, who transferred from the Nationalist Movement Party (MHP) and former right-wing Felicity Party (SP) member Mehmet Bekaroğlu, will be included in the Party Assembly list by Kılıçdaroğlu.

It is also alleged by certain CHP circles that the "Austria model" that was proposed to Kılıçdaroğlu before it can be included in the declaration and certain steps on education in native language such as Kurdish may be taken. Sources said that the notion of "bilingual education" may be placed in the declaration.
Last Update: Aug 28, 2014 1:22 am
RELATED TOPICS