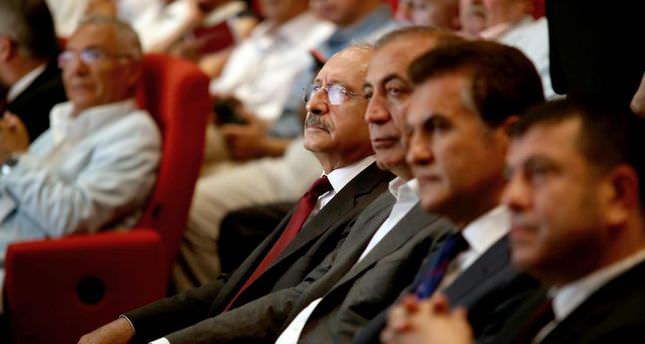 CHP deputies began to protest against the inauguration in front of guests, from home and abroad, by banging their fists on their tables in Parliament. However, the Parliament Spokesperson Cemil Çiçek said that he would not allow such protests to interrupt proceedings. Later on, CHP deputy Engin Altay threw a copy of council bylaws and CHP deputies walked out in protest just before Erdoğan took the oath in Parliament. CHP head Kemal Kılıçdaroğlu had earlier expressed his intention to not attend receptions and invitations held by President Erdoğan while CHP deputies walked out in protest. Despite the CHP protest, other opposition parties, the Nationalist Movement Party (MHP) and the pro-Kurdish Democratic Party of the People (HDP) attended the ceremony.

Slamming CHP's protests, AK Party Istanbul Deputy and Turkish Grand National Assembly (TBMM) Justice Commission Member Bülent Turan described the CHP deputies' reaction in front of foreign diplomats and representatives as a "disgrace." Turan said that what the CHP deputies did the Parliament was "not a democratic reaction at all."