Kılıçdaroğlu's lean toward the right wing sparks ire in CHP 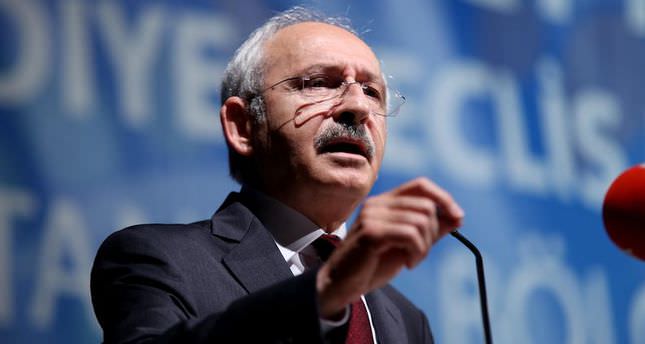 As criticism that CHP leader Kemal Kılıçdaroğlu is leaning toward the right wing escalates, political scientists speaking to Daily Sabah evaluated the CHP's strategies and said what Turkey needs is not a new right wing party, but effective opposition

Following the loss in the presidential election, Turkey's main opposition Republican People's Party (CHP) decided to hold an extraordinary congress on Sept. 5-6 due to pressure from hardline Kemalist deputies led by former Deputy Chairman Muharrem İnce. CHP leader Kemal Kılıçdaroğlu, who is likely to maintain his position with support from the majority of the party delegates and provincial heads, continues to play his cards against the party's ideological principles by leaning toward right-wing figures.

In recent days Kılıçdaroğlu met with politician Mehmet Bekaroğlu, who is a member of the Islamic rooted Felicity Party (SP) and is known for his thoughts against the free-market economic system. According to sources within the CHP, Kılıçdaroğlu proposed a membership for him in the CHP's executive board in the meeting. Though Bekaroğlu confirmed the claims he said, "In order to accept this offer, I should first decide to return to politics. Since I am hesitant on this issue, I neither rejected nor approved the offer." This meeting and Kılıçdaroğlu's new attempts attract right-wing votes; however, they spurred new discussions within the party. Regarding the issue, Arif Bulut, CHP's Antalya deputy, heavily criticized Kılıçdaroğlu's strategy for the party and said, "It was already tried and understood that it failed […] Chairman Kılıçdaroğlu is quite steady in his own perspective. He continues what he has always been doing since the beginning," adding that whoever wants to be involved with politics in the CHP may join it on the condition of being in line with the party's tenets.

"There are some who say, 'I am a deputy from the CHP but not following its political line exactly.' That is what we call inaccurate," he said. In line with Bulut, former CHP Deputy Şahin Mengü stressed that what Kılıçdaroğlu is doing is a denial of the party's basic principles. He said that Kılıçdaroğlu is the person who is scraping off Atatürk and his values from the CHP. Former CHP Deputy Ergün Aydoğan called Kılıçdaroğlu's policy unscrupulous in order to seek a hero for the party. "Of course we need to work for getting votes from different factions, but the way is not transferring men - this should be through developing policies and projects that Turkish society and other parties' voters can accept. However these activities did not benefit the party and the country and so it shall be," he said.

Political scientists also believe that the CHP's strategy to lean to the right will not work. Galip Dalay, a researcher at the Foundation for Political, Economic and Social Research (SETA), believes that the CHP's drive toward the right of center will only exacerbate the debate within the party and among the base over the party's identity and historical mission. Dalay asserted that in terms of identity, the CHP will have difficulty having a clear and unified stance on many major topics, as illustrated by the CHP's performance over the last few years. "The CHP is unlikely to garner votes from wide segments of society so long as it remains unable to offer a clear political vision to the public. And this renders the CHP unfit for governing Turkey in public perception," he said.

According to Mustafa Altunoğlu, a political scientist at Anadolu University, this strategy could not go beyond a tactical move for the election either in former Chairman Deniz Baykal's or Kılıçdaroğlu's chairmanship.

"I emphasize the assembly because in order to have an idea about political positions it is the place where one should have a look. This place is still closed to conservatives and Kurds to a great extent. If reform is the goal of the CHP accordingly, the Party Assembly needs a variety of opinions first of all. Although this situation may sound promising for the CHP's future, there is a possibility of an opposite result. As a matter of fact, we do not know how CHP elites or base would react to this type of real reform either. Yet it is possible to say that the long CHP history has witnessed attempts of reformist actors who have become obsolete," Altunoğlu said.

According to Dalay: "As long as the CHP invests in conjectural tactics rather than developing a meaningful political projection, it will be unlikely for the CHP to break into new voting blocs. Second, the creation of yet another conservative party is not what Turkey needs."
Last Update: Aug 29, 2014 8:48 am
RELATED TOPICS