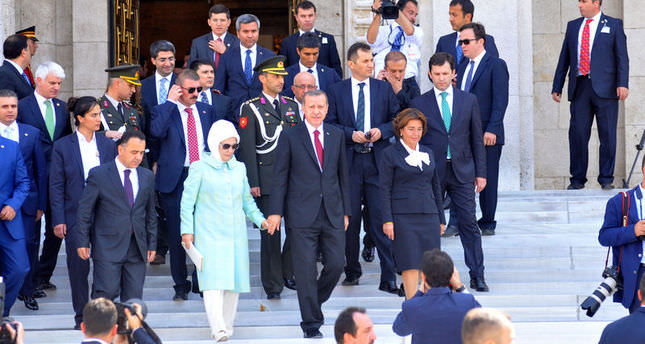 by Daily Sabah Aug 29, 2014 12:00 am
Yesterday, President Recep Tayyip Erdoğan's presidential inauguration ceremony witnessed an emotional moment as his wife, First Lady Emine Erdoğan, taking the side of the newly-elected president during his 40-year political journey, burst into tears at the ceremony.

With family origins in Turkey's Rize province in the Black Sea region, President Erdoğan, a father of four, was born in Istanbul's Kasımpaşa quarter on Feb. 26, 1954. Erdoğan described the Justice and Development Party (AK Party) as his "fifth child" at Tuesday's extraordinary party congress. Playing football as an amateur, Erdoğan took his first steps into politics in between 1969 and 1982.

Erdoğan was elected Chairman of the Beyoğlu Youth Branch of the National Salvation Party (MSP), later to be elected chairman of the party's Istanbul Youth Branches in 1976. When the Welfare Party (RP) was established after the military coup in the 1980s, Erdoğan returned to politics, and in 1984, he became the Beyoğlu district chairman of his party. Erdoğan was later elected as the Istanbul mayor in the March 27, 1994 local elections. But, then he was sentenced to a term in prison because of a poem he recited on Dec. 12, 1997 during a public address in the province of Siirt in southeastern Turkey. Certain Turkish dailies, during his imprisonment, hit the headlines with assertions that "Erdoğan cannot even be the head of a village."

Contrary to these headlines, Erdoğan established the AK Party and won every election ever since. A host of new dams, housing projects, schools, hospitals and power plants were inaugurated at a pace never before witnessed in the history of the country. All of these positive developments were named "the Silent Revolution" by some foreign observers and Western leaders.

The election-after-election victory of Erdoğan, who has been leading Turkish politics for over a decade, has led to the general acceptance among AK Party supporters that the AK Party equals Erdoğan. Yet, bidding farewell to his "fifth child" as he takes the presidential chair, Erdoğan said Tuesday that the AK Party will never be a oneman party.
Last Update: Aug 29, 2014 2:57 pm
RELATED TOPICS