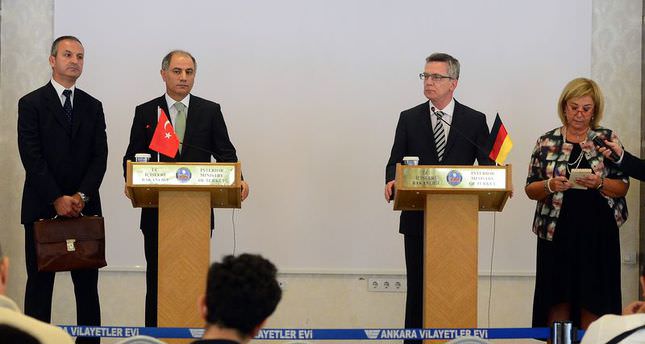 by Daily Sabah Aug 29, 2014 12:00 am
Turkish Interior Minister Efkan Ala has met with his German counterpart Thomas de Maiziere in Ankara on Friday to discuss the recent claims that Germany has been spying on Turkey.

The ministers touched upon several issues including cooperation against terrorism, problems faced by Turkish citizens in Germany during the presidential election and the overall situation of the Turkish community in Germany.

German Minister Maiziere spoke after the meeting and said, "Germany is looking forward to strengthen economic and cultural ties with Turkey. The developments within Turkey have a direct impact on Germany just like any development in Germany has a direct impact on Turkey. As two countries, we need each other."

Turkish minister Ala, answering a question about German wiretapping claims said, "Like I said to the minister, wiretapping between two allies is unacceptable. Intelligence service agencies of both countries are in contact and negotiating the allegations."

German Minister said that he understands Turkey's concerns over the claims and believes with the cooperation of two intelligence service agencies, the problem will be solved as soon as possible.

Claims that Germany has been spying on Turkey for the last five years were made in the German media over two weeks ago. German weekly Der Spiegel reported on August 16 that Germany's foreign intelligence agency BND had been spying on Turkey since 2009, prompting Ankara's strong condemnation. German Prime Minister Angela Merkel did not comment on the allegations.
Last Update: Aug 29, 2014 10:32 pm
RELATED TOPICS