Davutoğlu forms new government on the road to a strong Turkey 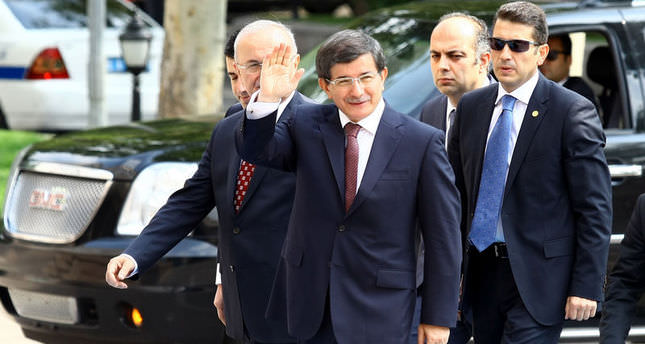 On Friday, Prime Minister Davutoğlu unveiled the list of his Cabinet nominees to President Erdoğan just before noon, and after a 45-minute meeting, Davutoğlu held a news conference at the Prime Ministry to announce the 62nd Cabinet of the Republic of Turkey. As widely expected by political circles in Ankara, there is no substantial change in the new cabinet and only four new names appointed as ministers. There are four new names on the list for the ministries of EU relations, customs and trade, and two deputy prime minister posts. The post that Davutoğlu left behind as foreign minister has been given to European Union Minister and Chief Negotiator Mevlüt Çavuşoğlu, and Volkan Bozkır, chair of Parliament's Foreign Relations Commission, took Çavuşoğlu's seat as the EU minister.

As Turkey's newly formed government is determined to stick to the former government's economic targets, the current economic team, including Economy Minister Nihat Zeybekçi, Deputy Prime Minister Ali Babacan, Development Minister Cevdet Yılmaz and Finance Minister Mehmet Simsek, also kept their positions in the new Cabinet. The program of the new government is expected to be read in Parliament on Monday and seek a vote of confidence on Sept. 4 or 5. Erdoğan left his position as chairman of the AK Party following his victory in the Aug. 10 presidential elections, gaining 52 percent of the vote.

Beginning his political journey as a U.S. and British-educated founding member of the Justice and Development Party (AK Party) in 2002, AK Party Antalya deputy Mevlüt Çavuşoğlu took the post of foreign minister on Friday after serving as EU minister and chief negotiator since Dec. 2013. Çavuşoğlu is a prominent politician when considering, in particular, Turkey's EU policy. He was the president of the Parliamentary Assembly of the Council of Europe (PACE) from 2010 to 2012, which is the highest level of office that a Turkish politician has held in an international institution to date. He also conducted the chairmanship of the Turkey-USA Inter-Parliamentary Friendship Caucus and received a medal of honor from Russia in 2011 and also from Ukraine in 2013. Shining through among the likely nominees with his profound experience in Turkey's European foreign policy ahead of the announcement of the new cabinet, Çavuşoğlu is officially the new boss of foreign politics. Çavuşoğlu is known for his statement, "EU [accession] is an irreversible process for us [Turkey]" by stressing Turkey's eagerness to EU accession.

Appointed as the EU minister and chief negotiator, AK Party Istanbul Deputy Volkan Bozkır, who was the former head of the Foreign Affairs Commission in Parliament, is a wellknown, quite experienced diplomat who has held many posts in New York, Brussels, Bucharest and Baghdad. He served as secretary-general and permanent representative to the EU in Brussels. He is also the current chairman of the Turkey-USA Inter-Parliamentary Friendship Caucus. In his short speech after his ministerial appointment was announced, Bozkır said after his taking the EU ministry post that Turkey's strategic goal is to obtain EU membership. This is a sign that Turkey will never give up its EU accession bid.

Keeping her post as the families and social policies minister, Ayşenur İslam started her political career as AK Party Sakarya deputy in the 2011 general elections. Known for her capacity in social policies and studies on women's rights, İslam, as a woman and mother, has based her policies on enhancing the rights of women and increasing women's voices across the country during her term in office. With the AK Party's initiative to give more priority to women both in social and business life, İslam has made significant steps for Turkish women and their rights. İslam is known for her "We need a change in mentality" statements regarding violence against woman.

Known for his closeness to Erdoğan due to former right wing Virtue Party (FP) leader and Prime Minister Necmettin Erbakan's term in office, Kurtulmuş was elected to the chair of the Felicity Party (SP) at the Third Ordinary Congress of the Party in 2008. After a rift with the followers of Erbakan, the signatures of a majority of the delegates provided for the sacking of Kurtulmuş. He resigned from that position in 2010. Later, Kurtulmuş founded the People's Voice Party (HSP). In 2012, HSP joined the AK Party. Appointed as deputy prime minister, when Kurtulmuş on Friday was criticized for being an "outsider" in the AK Party, he responded by saying, "The AK Party is not a coalition government, and so I am
not an outsider."

Efkan Ala served as the governor of Batman and Diyarbakır provinces and stood out due to his close relations with the people during his governance. Ala was also appointed undersecretary in the Prime Ministry and has been the internal affairs minister of Turkey since December 2013. During his time as undersecretary in the Prime Ministry, Ala was among the closest people to Erdoğan. His political vision and steps regarding the government's reforms was one of the main reasons of the continuation of his duty as the interior minister. Ala is known for his statement, "We haven't promised a problem-free Turkey, but as being led by esteemed leaders, we have promised governance that would be able to resolve its problems."

Bekir Bozdağ, who first entered Parliament in 2002, was appointed to the deputy prime minister post in 2011 and later took the post of justice minister with the Cabinet reshuffle after the Dec. 17 operation. Bozdağ has taken important steps to fight the Gülen Movement. Bozdağ is regarded as the carrier of the government's determination to combat Gülenists, who are believed to have infiltrated the police and judiciary. Bozdağ is known for his statement, "Those who cast upon the impartiality of the judiciary are not politicians, but judicial figures who grant their [judicial] gowns to movements and ideologies that they follow," as a response to criticism against allegations that the government put pressure on the judiciary.

Having an academic and journalist background, Yalçın Akdoğan became a member of Parliament representing Ankara in the 2011 general elections. Prior to being elected, Akdoğan was an academic and a journalist, having taught at the Bahçeşehir Üniversitesi and Anadolu University and written for Turkish Dailies Yeni Şafak and Star. Akdoğan was appointed as deputy prime minister in the newly formed Cabinet, and he is expected to be responsible for the reconciliation process that carries significant importance both for Erdoğan and the new government. Described as Erdoğan's right-hand man, Akdoğan is responsible for writing Erdoğan's speeches.
RELATED TOPICS