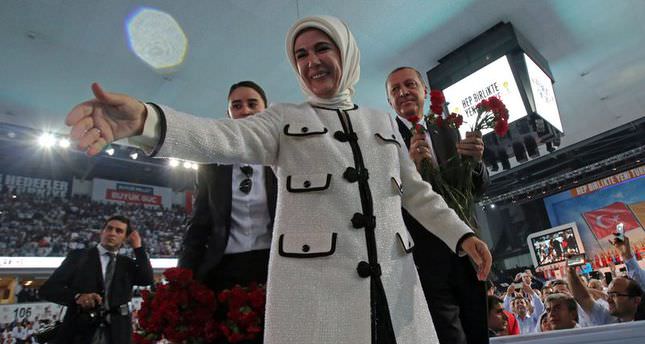 Emine Erdoğan successfully used her visibility and sincerity to draw the attention of the public to the oppressed and disadvantaged, especially to issues such as violence against women. Thus, her new role as first lady gives hope and inspiration

Born in 1955, Emine Erdoğan, the mother of four, is now the new first lady of Turkey. She is well-known by the public thanks to her husband Recep Tayyip Erdoğan's positions as mayor of Istanbul and prime minister of Turkey for the last 12 years. In addition to her recognition in Turkish society, she is also recognized worldwide due to the diplomatic visits and international meetings she has attended for over a decade now.

How will Emine Erdoğan present herself as first lady? We will see the answer in due time. Nevertheless, one can make estimations based on her performance as the wife of the prime minister. During her husband's 12 years in power, the Erdoğans visited a number of countries ranging from Africa to Asia. As well as being hosted at the White House, they embraced the African children in Somalia. This is why the world loved them so much. They reached those crisis points without discriminating and contributed greatly to raise awareness. Mrs. Erdoğan has always come to the forefront with her humanitarian discourse rather than her political and official identity. She paid a humanitarian relief visit, one of many, to Arakan along with a delegation and was welcomed by the people of Myanmar, which allowed official visits for the first time. Thus, she achieved a significant vision in terms of drawing the attention of the world to Arakan. Even though she did not deliver a speech during this visit, she could not help crying in the face of the great crisis she witnessed there.

She paid a visit to the families of those who lost their lives during an air operation while they were smuggling goods from Iraq to Turkey in Uludere in December 2011. When asked whether this was a meeting of mothers, she said that it was only mothers who could understand this grief. Despite the reaction that the Justice and Development Party (AK Party) encountered in the Uludere incident, Mrs. Erdoğan was welcomed warmly by the villagers in Uludere and held intimate talks with them. She said that the reason she came was to help stop other mothers from experiencing the same kind of pain.

During an inauguration speech in a meeting dedicated to Gaza four years ago in Istanbul, Mrs. Erdoğan said, "The children of Gaza want milk and bread just like our children. They are being killed in the safest place they know, in the arms of their mothers. Those who kill innocent children who have nothing to do with the war cannot justify these actions. I am not speaking as a political figure - I am voicing my pain as a mother." Israel's offensive against Gaza has continued since 2009. Mrs. Erdoğan's words in that speech have been engraved in the minds of people after each and every attack on Gaza. Unfortunately, the child massacres Mrs. Erdoğan referred to in 2009 were repeated once again during the holy month of Ramadan this year.

Speaking at a dinner at the Women and Democracy Association (KADEM), she highlighted that the Gaza question was a test for all humanity. She said that civilian societies were going through a test of sincerity and the international community failed on the Gaza issue. She also mentioned that Gazan children were shot dead while they were playing on a beach, pushing the end of one's tether. She said that in a world where everyone remained silent about Gaza, talking about Gaza was as effective as tanks and bombs. She, in fact, became an actor who verbalized not only the voices of Gazans, but also of all those who have been subjected to atrocities across the world and did not hesitate to take part in all of the meetings.

For the last 12 years, she lived an extraordinary hectic life with her husband. The first lady never left her husband on his own during his visits abroad and across Turkey. This is because it is important to underline her support for her husband on such a long and tiring journey. Raising four children, Mrs. Erdoğan is a caring mother and loving grandmother, who is exclusively interested in not only her husband's health, but also her entire family. She prefers to avoid taking medicinal pills and is interested in alternative medicine. Furthermore, she pays particular attention to her husband's diet including natural nutrition. She relieves her tiredness with herbal tea recipes, alternative treatments and special diets, which she passes on to her children and grandchildren. Of course, a family that has spent the last decade as the family of the prime minister experiences hard times and it is difficult to continue a standard family life. Moreover, Mrs. Erdoğan always finds time for her grandchildren and family even if time rapidly flies away. She also does not neglect cooking and gathering with her family to spend time with them.

For the new term, well, what are we expecting from Mrs. Erdoğan as a first lady?

Every first lady, regardless of where they are in the world, has a mission. Some prefer to remain invisible while others want to be known for their charitable work. Some of them cause scandals while some follow the cruel politics of their husbands, and other appear at fancy parties and fashion shows. We would guess about Emine Erdoğan's new first lady status by looking at her last decade's performance that she always has successfully used her visibility to draw the attention of the public to the oppressed and disadvantaged along with significant issues such as violence against women. She did this not as a burden on her shoulders, but with sincerity. She embraced the people in these regions - she wept and grieved with them. The public expects that Mrs. Erdoğan will maintain her responsible stance. What is more important than charity and philanthropic activity is to be a first lady who voices the issues on which the world remains silent and reach out to places others won't dare. Mrs. Erdoğan has remained on this path and at all times reminded people that her identity as a human supersedes her political one and gave confidence to people and displayed sincerity, becoming hope for many. Hence, we are expecting her to embrace those societies rather than keeping her visits at a political level alone. I have no doubt that she will continue to satisfy such expectations.

Meryem İlayda Atlas is Editorial Coordinator of Daily Sabah. She is board member of TRT, the national public broadcaster of Turkey. Atlas also serves as a visiting scholar at Çanakkale Onsekiz Mart University.
Last Update: Aug 30, 2014 2:31 am
RELATED TOPICS