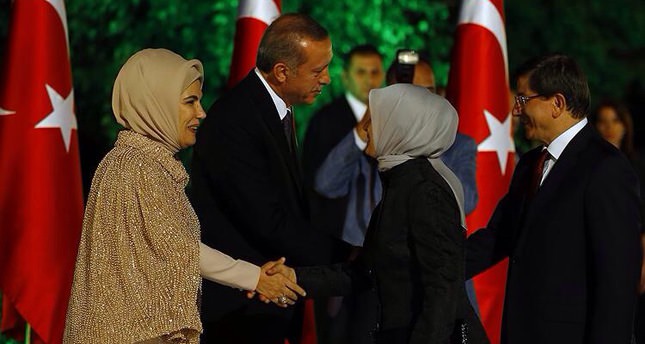 by Daily Sabah Aug 30, 2014 12:00 am
President Recep Tayyip Erdoğan, who was sworn in as Turkey's first ever directly elected president on Thursday, hosted a Victory Day reception Saturday evening, marked every Aug. 30, at the Çankaya Presidential Palace.

The country's brass hats, political leaders, journalists and actors attended the reception, meanwhile Turkey's main opposition party leader Kemal Kılıçdaroğlu and the Nationalist Movement Party leader Devlet Bahçeli announced that they will not attend the reception due to their busy schedules.

Victory Day marks the final battle in the Turkish War of Independence in 1922 led by Mustafa Kemal Atatürk, the founder of the Republic of Turkey. The key battle that secured the Turkish victory took place in Dumlupınar in the Kütahya province against Greek forces. The battle began on Aug. 25, 1922, and ended on Aug. 30 of the same year.

In the reception, Chief of General Staff Necdet Özel, made important remarks about Turkey's ongoing reconciliation process and the government's battle against the Gülen movement.

Özel stated that the government had not shared the road map of Turkey's Kurdish reconciliation process with the Turkish Armed Forces yet, and said " The government wants to continue the process without the use of arms."

He said that he demanded information from the Turkish Intelligence Agency(MİT) about the government's battle against the Gülen movement, but had not received any information as yet.

Özel also said that the Turkish Armed Forces does not have a plan for paid military service yet.
Last Update: Aug 31, 2014 9:59 am
RELATED TOPICS