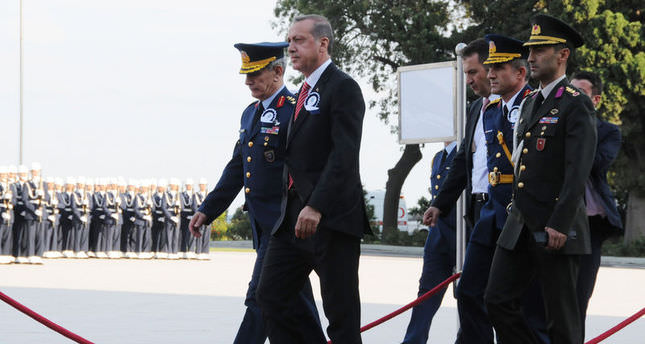 The wholesale fight against the Gülen Movement's infiltration of the state and harming of Turkey's national security through spying will continue without any break, says President Erdoğan

Turkey's first directly elected president, Recep Tayyip Erdoğan, responded to questions on the new Turkey, the Kurdish peace process, the struggle with the Gülen Movement and the Middle East and made key remarks about Turkey's near future in his first interview just days after his inauguration. Speaking to Al-Jazeera, Erdoğan said, "We will process our 12-year experience in a very different way hand in hand with the current ruling party. We really want to achieve our 2023 objectives with significant progress, and we will."

About the Gülen Movement, he pointed out that he and his colleagues would resolutely maintain the fight with them. "They are in our official records now according to the decision of the National Security Council, and we have started to cleanse them from within our institutions. It is a matter of national security at the moment," he said and added that he will hinder these types of structures that are a state within the state. "We move against them with a strong attitude. We have to purge them, and we will," he said.

Erdoğan also repeated his trust concerning new Prime Minister of the 62nd government of Turkey and the AK Party's new Chairman Ahmet Davutoğlu. He reminded that although Davutoğlu had intended to return to the academy before, he had not allowed Davutoğlu to leave his consultancy chair. "I said, 'you will compound theory and practice from now on and work for the country's benefit.' Indeed, we do not have any dispute in terms of values and worldview. He is our very hard-working brother, and I trust him very much," he stated.

For the Kurdish resolution process, Erdoğan complained about the different perspectives in Turkey regarding what people call "the Kurdish problem." He said: "If you label this as the Kurdish issue, there would be a Turkish issue, Laz issue or Albanian, Arab or Bosnian issue in return. There are 36 ethnic components in our country, and we love the fact that we have been created for the sake of the Creator." Related to this issue, he also underlined the urgency of a unified Iraq ruled by a national consensus government, while rumors on the independence of the Kurdistan Regional Government are more audible. Erdoğan said that terrorist groups emerge in countries with no stable government, resulting in al-Qaeda and giving birth to ISIS. "The source [of ISIS attacks in Iraq] is Syria and al-Qaeda.

Unfortunately, it is cruel Assad who is behind the increase of such militant groups, especially in Syria," he indicated and noted: "ISIS started out in Syria and has moved onto Iraq. It is our wish that the new Iraqi government eliminate the chaos that feeds such groups." Concerning the latest cease-fire agreement between Hamas and Israel, Erdoğan indicated his wish that this cease-fire initiates a longterm peace. "Either at the NATO summit or the United Nations General Committee meeting in September, I will bring this permanent peace issue to the agenda," he said. Over the weekend on Saturday evening Erdoğan hosted a Victory Day reception, marked every Aug. 30, at the Çankaya Presidential Palace.

The country's top brass, political leaders, journalists and actors attended the reception, while Turkey's main opposition Republican People's Party (CHP) leader Kemal Kılıçdaroğlu and the Nationalist Movement Party (MHP) leader Devlet Bahçeli announced that they did not attend the reception due to their busy schedules. Victory Day marks the final battle in the Turkish War of Independence in 1922 led by Mustafa Kemal Atatürk, the founder of the Republic of Turkey.

The key battle that secured the Turkish victory took place in Dumlupınar in the Kütahya province against Greek forces. The battle began on Aug. 25, 1922, and ended on Aug. 30 of the same year. Erdoğan is scheduled to pay his first official visit abroad as the country's 12th president to North Cyprus on Monday, the president's office said. Erdoğan will then visit Azerbaijan on Tuesday to discuss bilateral ties and regional issues.
On Wednesday, he will depart for Wales where he is scheduled to attend a two-day NATO summit on September 4-5.

The summit will take place amid the ongoing instability in NATO-friendly Ukraine and as the organization prepares to withdraw from its 11-year mission in Afghanistan. Erdoğan will also attend the U.N. General Assembly that will begin on September 16.
Last Update: Sep 01, 2014 4:33 pm
RELATED TOPICS