Conflict over congress timing within CHP 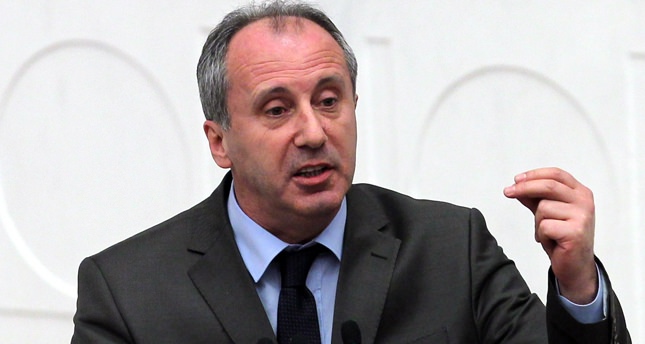 by Daily Sabah with Agencies Sep 01, 2014 12:00 am
As the chairmanship rift within Turkey's main opposition Republican People's Party (CHP) is the main agenda item of the extraordinary party congress to be held on Sept. 5-6, the conflict over the timing of the congress among delegates continues. Intra-party opponents indicated that the congress is being held too soon.

Following the presidential election defeat after CHP leader Kemal Kılıçdaroğlu announced Ekmeleddin İhsanoğlu as the CHP and Nationalist Movement Party (MHP) joint presidential candidate, an open rebellion within the party started and a group of CHP deputies called on Kılıçdaroğlu to stand down. CHP Deputy Nur Serter, who is known for her strong opposition to Kılıçdaroğlu, said there will not be enough time for candidates to prepare for the congress. Dismissing Serter's claims, CHP Deputy Chairman Sezgin Tanrıkulu said the congress would be composed of delegates who do not need time to absorb the issues. Tanrıkulu added, "It is hard to change their minds via intense campaigning." Deputy Chairman Tekin Bingöl also pointed out that the meeting had been announced far enough in advance.

Former Deputy Chairman Muharrem İnce, who resigned from his post and announced his candidacy for party chair, is continuing efforts to receive the support of delegates to reach the required number of signatures. It is reported that 300 CHP delegates signed for İnce to be a candidate for chairmanship at the congress - however the chances of Kılıçdaroğlu remaining as party leader look a lot stronger as 78 out of 81 CHP provincial chairmen have declared support for the current party chairman. CHP branches abroad also pledged their support for Kılıçdaroğlu in a joint statement.

Apart from the delegates' pursuit of party chair candidates, last week CHP dissidents harshly criticized Kılıçdaroğlu for leaning to the right by announcing controversial candidates in previous elections, and certain circles close to the CHP alleged that CHP Ankara mayoral candidate in the March 30 local elections, Mansur Yavaş, who transferred from the MHP and former right-wing Felicity Party (SP) member Mehmet Bekaroğlu would be included on the deputy list by Kılıçdaroğlu.

According to sources within the CHP, Kılıçdaroğlu proposed membership for Bekaroğlu on the CHP's executive board in the meeting. Though Bekaroğlu confirmed the claims, he said, "In order to accept this offer, I should first decide to return to politics. Since I am hesitant on this issue, I neither rejected nor approved the offer." This meeting and Kılıçdaroğlu's new attempts to attract votes from the right spurred new discussions within the party.

İnce claimed that ruling Justice and Development Party (AK Party) followers supported Kılıçdaroğlu because the CHP will never come into power under his leadership It is reported that Kılıçdaroğlu has been preparing a list of deputies, including certain names of his own and CHP dissidents who criticized Kılıçdaroğlu of moving away from a common sense approach. The CHP will gather in Ankara on Sept. 5-6 for a vote on the party's chairman following a disappointing result in the presidential election earlier this month.
Last Update: Sep 01, 2014 1:43 am
RELATED TOPICS