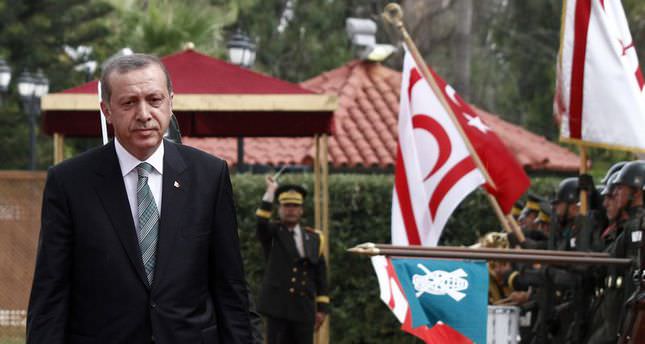 by AA Sep 01, 2014 12:00 am
Departing Monday for the divided Island of Cyprus on his first official overseas visit, Turkish President Recep Tayyip Erdogan said that a political solution on the island is dependent on Greek Cypriot good will.

Referring to restarted UN-brokered negotiations between Turkish and Greek Cypriots in February, Erdogan said; "While the Turkish Republic of Northern Cyprus regards a just solution in the talks, Greek Cypriot administartion has never shown the same goodwill."

Speaking during a press conference at the airport before his departure, Erdogan also urged the international community to take more decisive steps towards a solution.

The last time the two sides came close to a deal was in 2004 when a deal put forward by former United Nations (UN) Secretary General Kofi Annan to reunify the Turkish Cypriot and Greek Cypriot communities was defeated by a "no" vote in a referendum held in the Greek Cypriot administration. The Turkish Cypriots had voted in favor of the Annan plan.

A joint declaration announced by the UN mission in Cyprus on February 11 said a settlement between the two sides "will be based on a bi-communal, bi-zonal federation with political equality."

A solution would also be expected to address issues such as the constitutional framework, territorial adjustments, return of property to pre-1974 owners and/or compensation payments, return of displaced persons, and residency rights/repatriation of Turkish settlers.

"Turkish Republic of Northern Cyprus sets an example in the East Mediterranean with its advancing economic development and prosperity level. Parallel to the accelerated development in Turkey in the last decade, the per capita income in the North Cyprus has also risen, despite all the unjust limitations from the part of international community and Greek Cyprus," Erdogan also said.

The island was partitioned into Turkish and Greek zones in 1974 after Turkey's military intervention on July 15 as a right-wing military junta with Greek support tried to annex the island.