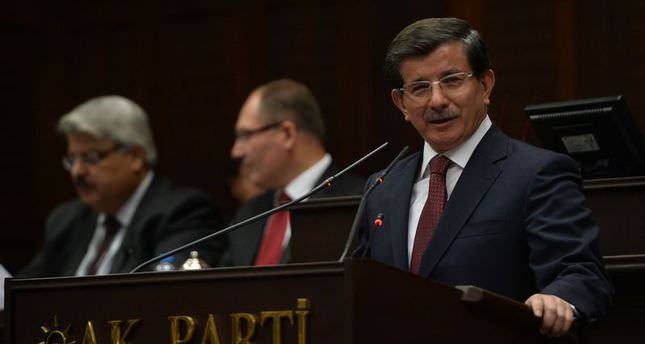 by AA Sep 01, 2014 12:00 am
Prime Minister Ahmet Davutoğlu has outlined the coming government's program, highlighting the resolution of the Kurdish question and the inclusion of minority groups such as Alevis in Turkish life.

The 62nd cabinet's plans were revealed Monday to the Turkish parliament.

The "solution process" is high on the government's list in a bid to to find a permanent settlement to a 30-year-old conflict with the outlawed Kurdistan Workers' Party, or PKK, in Turkey's southeast that has claimed more than 40,000 lives.

Davutoğlu said: "As Turkey's 62nd cabinet, the targets of the new roadmap are ending terrorism, disarmament, bringing [armed groups] into society and participation in democratic policy."

The prime minister added that he would work with President Recep Tayyip Erdoğan in a "synergy that will provide and strengthen the national will and power."

Turned to minority groups, Davutoğlu said the government would seek to accommodate their religious and cultural demands.

He also drew attention to the controversial 'parallel state' claims in which the U.S.-based preacher Fethullah Gülen is said to control a movement aimed at undermining the state and accused of conducting illegal eavesdropping.

Davutoğlu said the government would not allow the conspiracy to suppress society, policy and threaten national security.

Lawmakers will discuss the program on Thursday and Saturday before putting it to a vote. The ruling Justice and Development Party has 312 seats in the assembly -- more than enough to secure the program is passed.

Meanwhile, the assembly will convene next week for the remaining articles of the 150-article 'bag of bills' which includes mining legislation tabled after May's Soma disaster that killed 301 workers in Turkey's southwest.

Most of the articles were passed in August.