Leader of opposition CHP vows to suffer no dissent 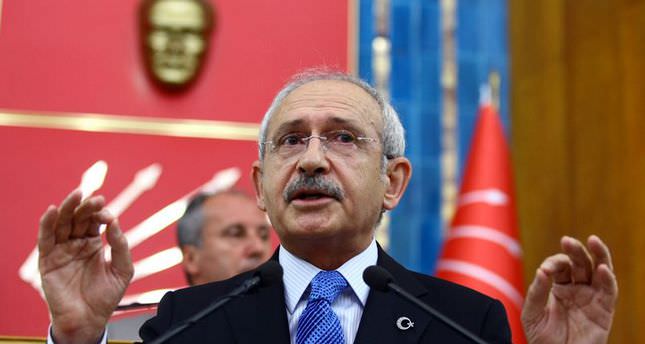 by Daily Sabah Sep 01, 2014 12:00 am
Intra-party disputes in the main opposition Republican People's Party (CHP) are dividing the organization, with disparate groups airing their grievances in public as the extraordinary party congress edges ever closer.

The CHP has set the congress for Sept. 5-6 after the defeat in the presidential elections caused a rift within the party. CHP Yalova Deputy Muharrem İnce had announced his candidacy for party chair two weeks ago, and criticized Chairman Kemal Kılıçdaroğlu for being autocratic. In response, Kılıçdaroğlu, said he would be ruthless toward those who create an undisciplined atmosphere in the party.

The dissident group led by Ankara Deputy Emine Ülker Tarhan called on Kılıçdaroğlu to resign after the CHP's failure in the presidential election. Furthermore, Kılıçdaroğlu received harsh criticism from İnce and many other deputies who have strong leftist roots. The intra-party conflict has escalated and is forcing CHP executives to settle on an extraordinary party congress. Conflict among party members is continuing just a few days ahead of the extraordinary party congress.

Kılıçdaroğlu responded to the criticism targeting his administration saying, "I will not let discrete voices speak against the party's solidarity. I will bring discipline to the party. If you discipline the party, you also assure confidence among society," and added, "Intra-party criticism does not mean criticizing your party via organizing press conferences. I will not allow these actions if I am re-elected." Kılıçdaroğlu also blamed dissident members who opposed his leadership and described the group of people of having "sick mindsets" a few days after the election loss.

Many expect no surprises to happen in the congress and for Kılıçdaroğlu to remain party leader, however, Muharrem, who resigned his post on the Central Executive Board (MYK) and become a candidate for chairmanship, believes the opposite. "There are CHP delegates saying that they will vote for me even though they signed on for Kılıçdaroğlu's chairmanship. I will shatter the fear in this party."

Reportedly, 300 CHP delegates signed for İnce to be a candidate for chairman at the congress, however 78 out of 81 CHP provincial chairmen have declared support for the current party chairman in a joint statement to the press. Besides these accusations and criticism, the date of the congress is also the subject of dispute among CHP deputies. One prominent CHP figure, Nur Serter, also slammed the party because of the date of the congress saying, "There will not be enough time for candidates to prepare for the congress." Earlier Muharrem criticized the date of the congress: "They organize a convention in 15 days like an assault. I can feel their fear, because of that I announced my candidacy. Why will it be that sudden?"
Last Update: Sep 02, 2014 10:08 am
RELATED TOPICS