President Erdoğan to discuss allegations of US spying on Turkey 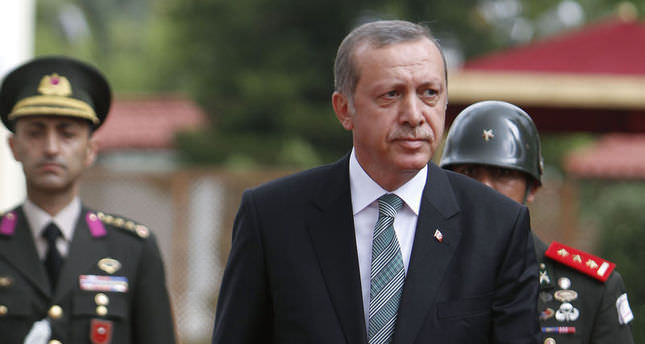 by Daily Sabah Sep 01, 2014 12:00 am
President Recep Tayyip Erdoğan, who assumed office on Aug. 29, remarked that Turkey is determined to bring surveillance issues to the table in the upcoming NATO summit and U.N. General Assembly after German- based weekly Der Spiegel on Sunday alleged that the U.S. National Security Agency (NSA) has been keeping tabs on Turkey.

Speaking ahead of his first official visit abroad to Northern Cyprus yesterday, the president evaluated Sunday's scandalous allegations that the German Federal Intelligence Service (BND) and the U.S. NSA has been spying on Turkey to gather information on classified issues. Erdoğan said, "The NATO summit and the U.N. General Assembly will be held in the upcoming weeks. We will talk [about] this issue as leaders." Erdoğan reiterated that the U.S. has previously spied on Germany and the latter has taken the issue very seriously and held the U.S. accountable for the incident.

"Let me be clear, all countries with strong intelligence abilities spy on and wiretap others," said Erdoğan, who emphasized the fact that it is more important to determine the motives and reasons why these countries spy on others and how they do it. Yesterday, Turkey's Foreign Ministry summoned the U.S. charge d'affaires, currently Washington's most senior diplomat in Ankara, over Der Spiegel's allegation that the U.S. has been spying on Turkey, according to Turkish Deputy Prime Minister Bülent Arınç. "For the reasons that the U.S.' name was mentioned, and such claims were made [...] the charge d'affaires has been called to the Foreign Ministry and information has been received from him," Arınç told reporters after the first meeting of Turkey's new cabinet following the presidential election. Der Spiegel published certain documents that were leaked by former NSA analyst Edward Snowden.

The report, titled "A Two-Faced Friendship: Turkey Is 'Partner and Target' for the NSA," asserted that while the NSA has cooperated with Turkey in fighting the outlawed PKK terrorist organization under the scope of NATO, it was also spying on the government, army, agents, ministries and energy companies of Turkey. Reportedly, Turkey is listed as one of the countries most frequently targeted by the U.S. government, and the NSA is tasked with collecting data in 19 different areas, including the surveillance of Turkish political leaders, to obtain information on their intentions. While data on "leadership intention" is classified as the second-highest priority rating in the leaked document, information on the Turkish military, its infrastructure, foreign policy goals and energy security have the third-highest priority rating, according to Der Spiegel.

It also asserted that the NSA shares most of the data it collected with its partners, including British, Canadian, Australian and New Zealand intelligence services and added that British intelligence developed its own access to Turkey through their Government Communications Headquarters (GCHQ) intelligence and security agency, spying on political targets and elements in the energy sector to keep tabs on these areas.