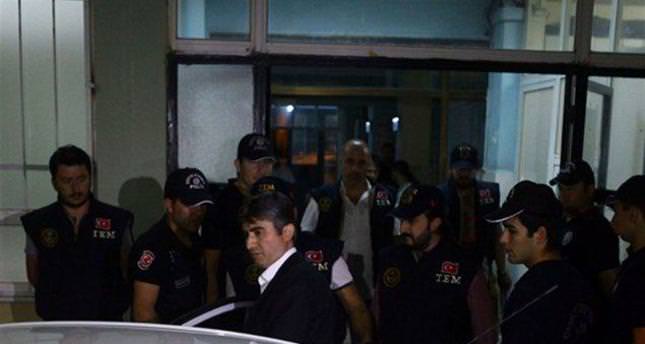 by Daily Sabah Sep 01, 2014 12:00 am
Istanbul prosecutors announced Monday that they were dropping all legal proceedings against 96 people probed as a result of corruption allegations, including government figures and various businessmen. The probe, which was initiated by a prosecutor with alleged links to the Gülen Movement - led by the controversial U.S.-based imam Fethullah Gülen - was defined by prosecutors as "an attempt to forcefully overthrow the government." Announcing the decision of non-prosecution against all 96 suspects, the prosecutors - İsmail Uçar, İrfan Fidan and Fuzuli Aydoğan - described the investigation as an "attempt to prevent the Turkish government from working." "Preparing a summary of proceedings that shows the prime minister of the Turkish Republic [Recep Tayyip Erdoğan, who is now the president] as a member of a criminal organization and that which refers to him as then-prime minister reveals an attempt to forcefully overthrow the government or prevent the government from fulfilling its duties," the prosecutors stated in their decision, according to initial reports. Speaking at Istanbul's Atatürk international airport before leaving for his first foreign trip as head of state, President Recep Tayyip Erdoğan said more operations could follow to arrest additional suspects. "As you know, it is only part of the process. It is not the end," saying there could be a new wave "if new information or evidence emerge. We are following this process very closely."

Denouncing the Gülen Movement, which infiltrated the police and judiciary with an aim to overthrow the government through the Dec. 17 and Dec. 25 operations, which were conducted under the mask of corruption and illegal wiretapping scandals against Erdoğan and his close family, President Erdoğan previously said, "If the Dec. 17/25 coup attempts were successful, we [key governmental figures] would now be standing trial. But, we fight not for ourselves, but for the nation."

After 11 years in power, which has seen his government tame the influence of the once-powerful military, Erdoğan has declared a war against Gülen, accusing him of running a "parallel state" within the state. Erdoğan also accused the movement of being behind a series of recordings posted on the Internet suggesting the prime minister and his family members were engaged in corruption. The Scientific and Technological Research Council of Turkey issued a report on the recordings, stating that the tape recordings posted on social media platforms allegedly belonging to the prime minister and his family, were fabricated by electronically cutting and pasting different syllables from different speeches under a single pool of voice recordings.