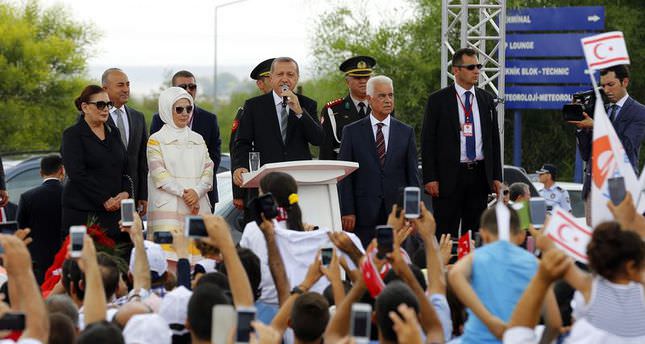 President Erdoğan, during his first official visit to the KKTC, said Turkey's underwater energy and water projects could spur the island's reunification efforts

President Recep Tayyip Erdoğan, speaking yesterday in the Turkish Republic of Northern Cyprus (KKTC) during his first official visit after his inauguration last week, said Turkey was willing to resolve the Cyprus problem but was seeking the will necessary from both Greece and the rest of the international community. He said Turkey would never overlook Northern Cyprus and added that he was going to hold talks with the Turkish Cypriot government officials regarding the reunification talks on the island.

Touching on the Turkey-KKTC Water Project that is expected to carry fresh water and energy to the island through an underwater pipeline from the city of Mersin, Erdoğan said that the project could also help in the reunificati on efforts. Erdoğan said Greece should also do its bit as a guarantor country, criticizing Greek Cyprus for ignoring Turkey's constructive stance. During his official visit to Northern Cyprus, Erdoğan is expected to hold individual talks with Northern Cyprus President Derviş Eroğlu and later with Turkish politicians on the island.

Speaking to the press ahead of his Northern Cyprus visit, President Recep Tayyip Erdoğan said that talks on reunification between Northern and Southern Cyprus will yield soon. "In the talks, the Turkish side introduced a comprehensive and just resolution. Unfortunately, Southern Cyprus did not approach it positively. We hope that as with the Turkish side's goodwill, Greek Cypriots will contribute to the process with goodwill," added Erdoğan. He stated that the people of Cyprus have been victimized by the ongoing dispute on the island, and claimed the Greek Cypriot government has never had a constructive attitude towards resolving the conflict. Meanwhile, he also called on the international community to take steps to contribute to the resolution of the conflict.

Urging the international community to take determined steps on the Cyprus issue, Erdoğan said that both he and the Turkish government included the Cyprus issue on the agenda during their talks. Noting that Northern Cyprus sets a precedent within the entire south Mediterranean region with its democratic state structure and increasing welfare, Erdoğan added that Turkish Cypriots have been developing along with the developments in Turkey's economic stability and per capita income. Erdoğan also pledged that this momentum between Northern Cyprus and Turkey will continue to increase and turn Northern Cyprus into a center of attraction in the region.
Last Update: Sep 02, 2014 12:44 pm
RELATED TOPICS