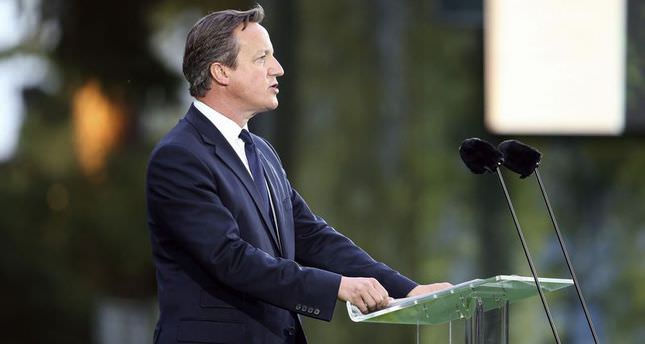 Turkey is cooperating with the U.K. against the threat posed by ISIS, said British PM Cameron, underlining Turkey as a key component of Western security

As the U.K. government works on a new action plan to fight ISIS after numerous European citizens traveled to conflict areas with an aim to support ISIS, British Prime Minister David Cameron on Monday said that Turkey and the U.K. have been cooperating on security intelligence and other issues that they never had before to take precautions to prevent militants returning to the U.K. Giving a speech to the House of Commons over the increasing Islamic State of Iraq and al-Sham (ISIS) threat to European countries, Cameron stated that among the measures envisaged was a plan to give border police powers to seize passports from departing would-be ISIS militants and restricting the movement of suspects. "When police suspect a traveler at the border, they are not currently able to apply for the royal prerogative, so they only have limited stopand search powers," said Cameron.

"We will introduce specific and targeted legislation to fill this gap by providing the police with a temporary power to seize a passport at the border, during which time they will be able to investigate the individual concerned," added the British prime minister.

As Western officials warn about the possible ISIS attacks in the Western countries with ISIS militants traveling back to those countries, Cameron echoed the European Council's beliefs that ISIS is a direct threat for every European country. "We now believe that at least 500 people have traveled from Britain to fight in the region.

This is in addition to 700 from France, 400 from Germany, and hundreds more from countries, including the U.S., Canada, Austria, Denmark, Spain, Sweden, Belgium, the Netherlands and Australia," added Prime Minister Cameron. "There is a poisonous ideology of Islamist extremism that is condemned by all faiths and by all faith leaders," noted the British prime minister, highlighting that the ideologies of ISIS has nothing to do with Islam.

Referring to perpetrators of terrorism in the U.K. in past years such as British citizens who return from terrorist training camps in Pakistan or elsewhere around the world, or foreign nationals living in Britain, Cameron noted that what happens in Iraq now with ISIS is a graver and deeper threat to the U.K.'s security than before. "We have all been shocked and sickened by the barbarism we have witnessed in Iraq this summer: the widespread slaughter of Muslims by fellow Muslims, the vicious persecution of religious minorities such as Christians and Yazidis, the enslavement and raping of women and, of course, the beheading of American journalist James Foley with the voice of what seems to have been a British terrorist recorded on that video," Cameron cited.

Meanwhile, British media on Tuesday voiced skepticism over plans announced by Cameron to counter the threat of jihadist fighters traveling to Iraq and Syria. "He is doing all he can to sound tough without having the details in place to back up the rhetoric," wrote Rachel Sylvester, a political commentator for the Times.

She cited the former head of public prosecutions Ken Macdonald as saying that officials were in "la-la land" if they thought the idea of blocking extremists would be accepted by the international community.

The Guardian newspaper reported Monday that other new measures that may be introduced include making it easier for intelligence agencies to access information on airline passengers, legislation to tighten terrorism prevention and investigation measures, and more cooperation with Turkey and Germany to prevent fighters from returning to the U.K.

The Daily Mirror tabloid called the measures "vague," and said there had been little support for them from the Liberal Democrats, the junior coalition partner in Cameron's government. The Daily Mail also said the measures were "chaotic." The Financial Times said the proposals could rile Turkey, a major transit point into Syria, which could be forced to host British extremists not allowed back to Britain.

Fighters from the ISIS, which already have control of parts of Syria, captured the northern Iraq city of Mosul in June and then surged across the north, taking control of a number of predominantly Sunni cities.

In August, the group claimed to have executed American journalist James Foley in a video that apparently showed his beheading by a man who appeared to be speaking in a British Accent.
Last Update: Sep 03, 2014 11:35 am
RELATED TOPICS