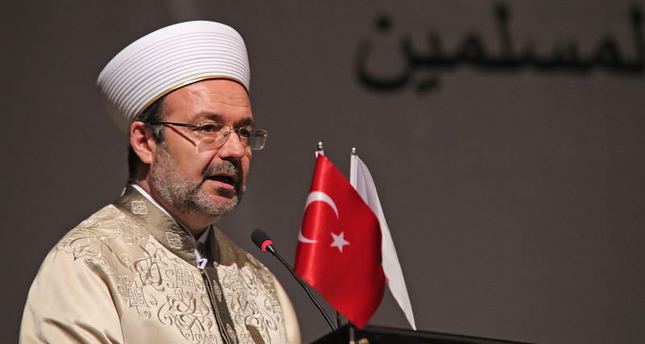 by Daily Sabah Sep 02, 2014 12:00 am
Drawing attention to the rise of Islamophobia and arson attacks targeting mosques in European countries, Turkey's Presidency of Religious Affairs Mehmet Görmez criticized Pope Francis without citing his name. Görmez said attacks motivated by Islamophobia should be prevented and accused the Pope and Vatican for not contributing enough to reconciliation between members of different religions and said peace cannot be established "only through washing the feet of a young woman or organizing a football match or a tournament."

Speaking at a press conference, Görmez highlighted that the Islamic world is going through an extremely difficult period of time with millions of Muslims under oppression, while numerous organizations such as the Islamic State of Iraq and al-Sham (ISIS) and others act in contradiction to the nature of the religion.

He said that around 36 mosques in Germany alone have been attacked in 2013 while Islamophobia around the world is on the rise. As of August 2014, the number of mosques that have been the target of racist attacks has risen to 70. Görmez added that Muslims are intentionally being targeted for their religion and are being labeled as a security threat. Görmez said that the Vatican and all other religious authorities should focus on the issue. "This problem cannot be resolved through the organization of interfaith football games or washing people's feet," he said, and expressed that such actions are very ineffective even though they may have good intentions behind them. He stated that it is necessary to take a stance against treating Muslims as others, harboring hostile attitudes toward them and to take serious action to stop such marginalization by religious authorities. Pope Francis has previously washed the feet of 12 prisoners from different religions and ethnicities including a Muslim girl. He initiated the Interfaith Peace Match in efforts to promote interfaith dialogue and has said there is a need for more interfaith dialogue, "particularly with Islam."