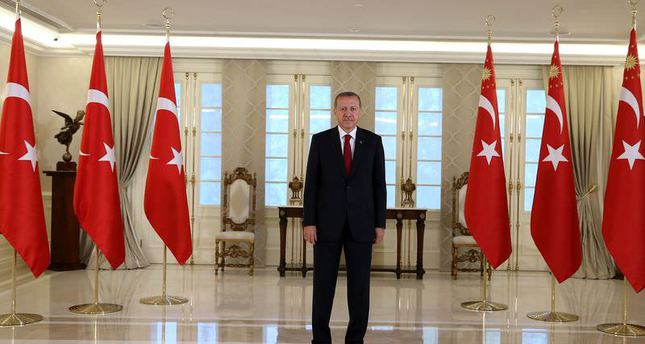 by Daily Sabah Sep 02, 2014 12:00 am
President Recep Tayyip Erdoğan who was popularly elected with 52% of the votes on August 10 is expected to continue to work with his previous team of experts from his term as the prime minister according to reports.

Having worked with many of his colleagues for over 10 years, most of the staff at Çankaya Presidential palace will consist of prominent ministers and advisors including Binali Yıldırım, Hasan Doğan, İbrahım Kalın and more.

Binali Yıldırım, who is one of the co-founders of AK Party and has previously served as the Minister of Transport, Maritime and Communication is expected to become a special advisor to Erdoğan. However, his current political status as a deputy prevents him from serving this position and will most likely be appointed following the 2015 general elections in Turkey.

Erdoğan's chief of staff Hasan Doğan –who has for years prepared Erdoğan's daily programs and agenda-, will continue to serve in the same position at the presidential palace. However, it has been noted that he will serve this position under the title of 'ambassador'.

İbrahim Kalın, Erdoğan's former deputy secretary will serve as deputy secretary general. Kalın will also serve as an ambassador and is known for his critical position as he has attended numerous critical meetings between Erdoğan and foreign countries.

Erdoğan's chief advisor is expected to be Mustafa Varank, while Lütfullah Göktaş will be responsible for the media and press. Likewise, Aydın Ünal who is known for writing countless numbers of Erdoğan's speeches will serve as the key advisor to Erdoğan. Yiğit Bulut, on the other hand is expected to serve as the advisor responsible for the economy while Şenol Kazancı will continue to be a key advisor to Erdoğan.

As the first popularly elected president of Turkey, Erdoğan pledges to make Turkey a renowned global power with its economic, social and political stability. He promises to work in cooperation with the government and continue to fight Gülenist agents who attempt to infiltrate Turkish state institutions and establish a state within a state and pay allegiance to Fethullah Gülen who lives in a self-imposed exile in rural Pennsylvania.