Azeri concerns will get a hearing at NATO summit, says Erdogan 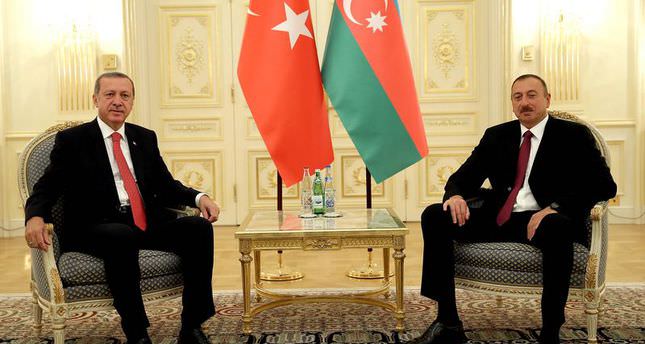 by Daily Sabah Sep 03, 2014 12:00 am
Turkish President Recep Tayyip Erdogan said that Turkey will demand the fulfillment of promises given to Azerbaijan regarding the region at the NATO summit to be held on Sept. 4-5. Erdogan, who paid his second official visit as president to Azerbaijan in a show of support for the neighboring country, arrived on Tuesday in Azerbaijan for a two-day official visit where he held bilateral talks with his Azeri counterpart Ilham Aliyev. Erdogan stated that the fulfillment of promises is not a favor but a right for Azerbaijan. Erdogan told the media that the two leaders held talks regarding the latest regional and international developments along with further opportunities for cooperation.

Erdogan pointed out that he and Aliyev compared notes over the Nagora-Karabakh region under the scope of Azerbaijan's indivisible integrity. Erdogan will hold bilateral meetings with the heads of state or government of the U.S., Germany, France, Spain, Italy and Poland at the NATO summit."

The issue that our brotherhood hit the top is, undoubtedly, the Nagorno-Karabakh issue, so we brought this issue to the table as the most important agenda topic," Erdoğan pointed out, vowing to show Turkey's continued support to Azerbaijan on all international platforms. Reiterating that he will head to the NATO summit to be held in Wales on Sept.5-6, Erdoğan stated that Turkey will show its determination over the Nagorno-Karabakh issue at the summit. "Let our brotherhood walk to the future by strengthening," he noted, and stressed that relations between Azerbaijan and Turkey is the "legacy of these countries ancestors."

Later, Erdoğan and Aliyev visited late Azeri President Haydar Aliyev's tomb. Erdoğan, addressing the Azeri nation said, "You [Azeri people], that even at the hardest time extended a helping hand to your brothers [Turkish nation] […] are the architects of the unshakable relations between our countries. Our relationship is based on such strong unity and brotherhood."

Highlighting that Turkey and Azerbaijan support each other on all international platforms, Aliyev pointed out that they discussed ways to enhance bilateral relations and keep those relations at the highest level.Aliyev thanked his Turkish counterpart for supporting Azerbaijan's stance on the Nagorno-Karabakh issue. "[Turkey's support on Armenian-Azerbaijani issue] is important to us [Azerbaijani people]. Turkey always sides with Azerbaijan.

The Armenia-Azerbaijan conflict is the biggest threat for the region. Twenty percent of our land is under occupation. There are more than 1 million immigrants. The U.N. Security Council approved four articles regarding the solution of the issue, but Armenia disregards these verdicts and refuses to withdraw. This issue will be solved under a legal framework," added Aliyev. Regarding the 1915 Armenian incidents, Aliyev, said that Azerbaijan always sides with Turkey. Azerbaijan embassies and diaspora work in cooperation against the Armenian government's allegations.

On the eve of the 99th anniversary of the 1915 Armenian incidents, Erdoğan in April extended an olive branch to Armenia by releasing a historic message related to the 1915 incidents in nine languages including Turkish, Armenian, English and French. It was the first time in the Republic of Turkey's history that a leader delivered such a message. Pointing out significant remarks in his message, Erdoğan said, "It is a duty of humanity to acknowledge that Armenians remember the suffering experienced in that period, just like every other citizen of the Ottoman Empire."
He called for responsibility by saying, "The incidents of World War I are our shared pain.

To evaluate this painful period of history through a perspective of just memory is a humane and scholarly responsibility."In April, as a Turkish political tradition, Erdoğan visited Azerbaijan directly after the March 30 local elections resulted in a decisive victory for his Justice and Development Party (AK Party). Meeting in Baku, the leaders discussed various topics from large joint economic investments to the Gülen Movement's harmful actions in both countries.

In the meeting, Erdoğan stressed that both governments should take urgent steps to confront the movement and prevent it from spoiling cooperation between Turkey and Azerbaijan. Aliyev confirmed that the Azeri government is conducting an investigation into Gülenist structures in his country.
The bilateral discussion between the two leaders, Erdoğan brought a file to the table focusing on Gülenists who infiltrated large joint projects. As sources reported, the leaders agreed to take steps against those infiltrators who could threaten the crucial and costly projects. Both leaders acknowledged their confidence in one another and the importance of close relations between Turkey and Azerbaijan.