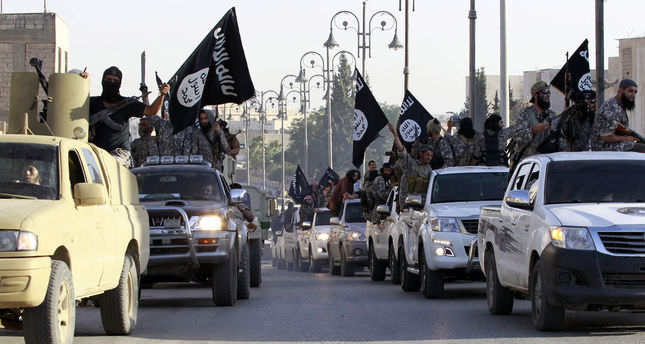 Battling the influx of foreigners from Europe seeking to join violent armed factions in Syria such as ISIS, Turkish authorities detained a German national attempting to cross the border into Syria along with a French citizen returning from Syria

One German and one French citizen were arrested over the past three days in Turkey. The German national was attempting to cross from Turkey into Syria to join the Islamic State of Iraq and al-Sham (ISIS) when he was apprehended by security forces in the southern Turkish province of Hatay's Reyhanlı district yesterday.

Marco Jonuscheit, 20, first flew to Istanbul from Germany and then traveled to Reyhanlı on the Syrian border. Acting on a tip, the Turkish National Police in Hatay captured Jonuscheit.The young German was interrogated by police and said he would travel to Syria to convert to Islam and join ISIS for "jihad." Jonuscheit was deported to Germany after being interrogated.

Also in Hatay, security forces detained a French citizen of Tunisian origin, Hamza Mandhouj, on Sunday.Leaving his wife in France, Mandhouj traveled to Turkey by car in the company of his two-year-old daughter, Assia, in January. From there, he traveled to Syria to join the al-Qaida affiliate Nusra Front with his daughter in tow.

Mandhouj, who was wanted by French authorities, arrived in Hatay from Syria with his daughter on Sunday and checked into a hotel.Hotel staff, already informed by police on his inclusion to a list of wanted suspects, alerted the authorities. Hatay police arrested the man in the hotel and notified his wife, Meriem Raheim.

Raheim, 25, traveled to Turkey to reunite with her daughter. She had filed for divorce from her husband and called on French authorities to rescue her daughter, "the youngest French hostage in Syria," in an emotional appeal in March. Raheim traveled back home aboard a plane provided by the French Ministry of the Interior and was welcomed by French Interior Minister Bernard Cazeneuve. Cazeneuve told reporters at the airport that Raheim endured "many trials" and "fought hard" to get her daughter back. The French minister also thanked Turkish authorities for reuniting the baby girl to her mother. French media reported that the husband had repeatedly called his wife urging her to join them in Syria.

France, concerned by its citizens joining radical groups in Syria and Iraq, introduced a bill two months ago to prevent French nationals from joining ISIS, al-Nusra Front and other terrorist groups abroad. The bill includes a ban on travelling abroad for up to six months for French citizens suspected of seeking to join these groups and temporary confiscation and invalidation of their passports. Official figures show at least 800 French nationals have recently travelled or planned to travel to Syria to join radical factions.

According to European media outlets such as Deutsche Welle, about 2,500 people from various European countries including Germany, the U.K., Italy and France have joined the ranks of ISIS and al-Nusra Front in Iraq and Syria. Concerned with the growing numbers, European countries are seeking to develop a joint strategy to prevent the influx. Experts say the so-called "jihad" in Iraq and Syria attracts young and highly impressionable Europeans seeking an adventure abroad.

Turkey, threatened by ISIS, has drawn criticism for its alleged support of the armed group though Turkish authorities have repeatedly denied it. ISIS has been holding 49 Turkish consulate staff hostage in Iraq since June.

Although border security was reinforced throughout the four years of conflict in Syria and the new ISIS threat in Iraq, the country's long border with both countries is used by foreigners to sneak into the countries to join radical groups.