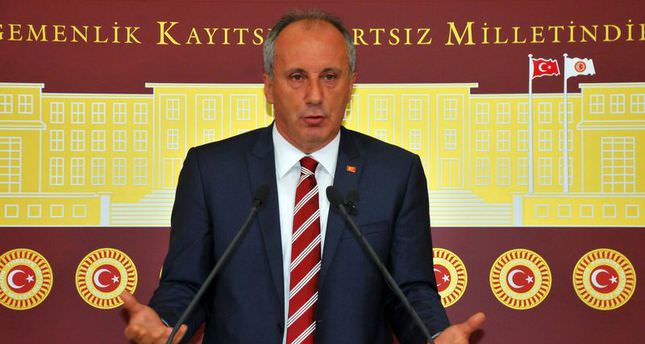 by Daily Sabah Sep 03, 2014 12:00 am
Muharrem Ince, who is currently running as a candidate to become the Republican People's Party (CHP) leader, continued to lambast the party's current leader Kemal Kılıçdaroglu and blamed him for the CHP's repeated election defeats and for changing the party's leftist orientation toward the right ahead of the extraordinary party congress to be held on Sept. 5-6. Claiming that Kılıçdaroglu is waiting for the ruling Justice and Development Party (AK Party) to fall apart in order to come to power, Ince stated that he aims to get 30 percent of the vote in the 2015 general elections, while claiming that he would become the country's prime minister in 2019.

According to İnce, there are nine reasons why Kılıçdaroğlu has largely failed to become a successful leader of the main opposition. İnce listed his reasons by saying that Kılıçdaroğlu does not believe in consensus and accused him of not taking CHP member's ideas seriously.

Asserting that Kılıçdaroğlu is far from being scientific, İnce said that the CHP leader does not know about how to conduct perception management, nor does he conduct public opinion polls.İnce, echoing his previous sentiments, claimed that Kılıçdaroğlu likes the right wing while keeping distance from leftists. "He is far from assertive and always ready to be the runner up. He can never say I will win or challenge," İnce added.

Accusing Kılıçdaroğlu of moving away from the spirit of revolution, İnce said that Kılıçdaroğlu is distant from the public and does not understand their demands and expectations. "He does not think about leaving his post at all and has become a politician obsessed with his position. He says different things in different places. You could hear him say completely different things in Eastern and Western Turkey.

He is not brave and is hesitant to take risks," added İnce.In recent days Mehmet Bekaroğlu, who is a member of the Islamic-rooted Felicity Party (SP) and is known for his thoughts against the free-market economic system, has accepted Kılıçdaroğlu's proposal to become a member of the CHP for a seat in the party's executive board. This meeting and Kılıçdaroğlu's new attempts to attract right-wing votes; however, they spurred new discussions within the party.

The reason for the upcoming extraordinary party congress could be traced back to the presidential election when secularist CHP-nominated Ekmeleddin İhsanoğlu, a joint presidential candidate who served as the former secretary-general of the Organization of Islamic Cooperation (OIC), sparking controversy within the party.