PKK to stay on terrorist list despite media campaign 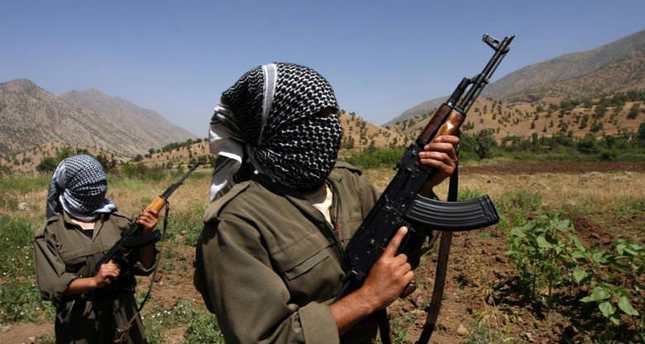 by Ragıp Soylu Sep 03, 2014 12:00 am
The PKK has been surprisingly praised by Western media outlets as a new ally against the more violent and radical Islamic State of Iraq and al-Sham (ISIS), yet several officials both from the U.S. and Europe have said that the PKK will remain on their lists of terrorist organizations.

German Chancellor Angela Merkel last week ruled out a possible armament of the PKK and reiterated that her country's assessment of the militant group, recalling its place on the EU's terrorist list. Likewise, U.S. State Department spokeswomen Jen Psaki said that the American position regarding the PKK as a foreign terrorist organization (FTO) hadn't changed. "[C] ertainly we would not view it as being on the same side just because there is a common enemy […] If circumstances warrant, an FTO designation can be reviewed before a five-year review is required, but I don't have any particular updates or anything to read out for you in this case." she added.

The PKK got popular rapidly with the Western press thanks to ISIS's attack on Mahkmour, a town 50 kilometers away from the Kurdistan Regional Government's (KRG) capital Irbil and largely inhabited by Kurds. The strategic and social importance of Mahkmour for PKK militants pushed the group to side with their longtime foe the peshmerga forces, and suddenly a public relations campaign on behalf of the militant group was begun by the foreign press.

The PKK seems to be enjoying playing the "good guys" in the international arena despite their past crimes still remembered by millions in Turkey. The PKK focused on unleashing its activities against ISIS by using its news organizations backed by a solid social media campaign following several editorials and news stories in support of the PKK from major media outlets.

Western governments still don't buy this performance. "You cannot remove the PKK from the terrorist lists simply by ignoring Turkey's position regarding this issue. Turkey is in talks with the PKK for its disarmament and no one is going to derail this process," a source familiar with the issue said.

On the American side, the only entity that can lobby on behalf of the PKK in Washington is the KRG's diplomatic mission.The KRG last year spent over $1.7 million (TL 3.7 million) for lobbying in the U.S. capital, catching up to Turkey's $2.12 million budget, according to data taken from Al-Monitor. Senior KRG sources said that they are only focusing on their struggle against ISIS. Another lobbying group, Turkey's Democratic Regions Party (BDP) is present as well, but has a lack of financial resources.

For KRG officials, their position is in a tough corner as well. A Turkish diplomat told Daily Sabah that the U.S. is still keeping the KRG's ruling Kurdistan Democratic Party (KDP) and coalition member Patriotic Union of Kurdistan (PUK) on a black list. Both KRG President Massoud Barzani's KDP and Jalal Talabani's PUK have been on the Tier 3 group of organizations since 2001 due to their alleged support for terrorism under the U.S. Patriot Act. Those on the Tier 3 group of organizations cannot obtain visas to come to the U.S. without having a waiver which is usually provided after meeting certain criteria. Barzani cancelled his official visit to Washington in February in protest against American sanctions against his party. "Until the issue of giving visas to the citizens of Kurdistan is solved, I won't visit the United States," Barzani is said to have written to the White House as he cancelled his trip, according to Kurdish media.