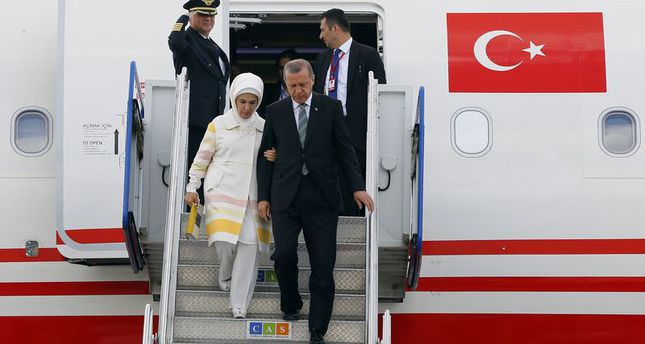 by Daily Sabah with Agencies Sep 03, 2014 12:00 am
Turkish President Recep Tayyip Erdoğan on Monday visited the Turkish Republic of Northern Cyprus and pressed for a two-state solution on the divided island, on his first trip abroad since his inauguration.

President Erdoğan flew in on Turkey's new presidential plane, an Airbus delivered last week that has already been painted in the national colours and dubbed by the press as his "Air Force One." As he held talks with Turkish Republic of Northern Cyprus (KKTC) President Derviş Eroğlu, the Greek administration of Southern Cyprus in Nicosia condemned the visit as "illegal" and "a step that hampers reunification talks." Erdoğan reaffirmed his support for the KKTC and said the only way forward was a two-state solution of two equal entities. "It is our common desire to reach a permanent and fair agreement. The KKTC is doing whatever is necessary to work on a new partnership based on a two-state solution and political equality. It is not possible for us to reach any agreement that is not based on a two-state solution.
Greece and the Greek Cypriots should demonstrate the same goodwill," Erdoğan said.

However, spokesman Nikos Christodoulides said the government considered the statement as "unacceptable" and condemned Ankara's "frequent call for the involvement of Greece in the dialogue in an effort to equate the responsibilities for the ongoing occupation in Cyprus for which Turkey is solely responsible."

Erdoğan also urged the international community to take more decisive steps towards a solution. "No one should test our patience and waste our time. This window of opportunity cannot remain open forever," Erdoğan said and added that he would discuss Cyprus at this week's NATO summit and at the opening of the U.N. General Assembly later in the month. Furthermore, Erdoğan said Monday the Halki Seminary could be opened, but simultaneous steps should be taken by the Greek side to improve the religious affairs of the Muslim community in Western Thrace.

Established in 1844 on the island of Heybeliada in Istanbul, Halki Seminary, an educational organization for Greek Orthodox men of religion, was closed in 1971 by a law that placed religious and military training under state control. "It is not a difficult task to open the Halki Seminary but you should also hold on to your promises... Still Greece insists on appointing Muslim religious people for the Western Thrace people," Erdoğan said, The move is seen as countering the freedom of religion entitled to minorities under the international 1923 Lausanne Treaty. Turkey also officially defined the law as "regrettable."

There are about 150,000 ethnic Turks living in Greece's north-eastern region of Western Thrace whose status was established by the Treaty of Lausanne in 1923.