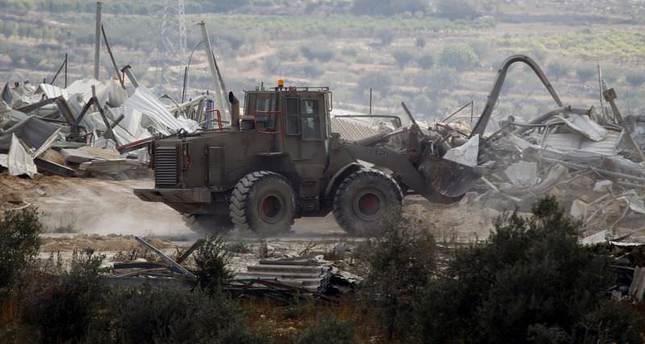 by Daily Sabah Sep 03, 2014 12:00 am
Turkey has condemned the illegal Israeli appropriation of land in the West Bank, the biggest illegal settlement attempt by Israel in recent decades, consisting of nearly 988 acres. Turkey emphasized that Israel's continued attempts to further seize land in the West Bank is in violation of international law.

On Sept. 1, Israel declared that they will appropriate 988 acres of land to the south of Bethlehem, near to the Etzion Settlement. This land grab is the largest action Israel has undertaken in the occupied Palestinian lands since 1980. The Turkish Foreign Ministry officially condemned Israel in a written statement."We denounce Israel's seizure of land, which is aimed at building illegal settlements in villages in the West Bank, and Israel's decision to dispossess the largest scale of land in the West Bank for the last 30 years, which displays this country's practices that violate international law on occupied Palestinian lands."

The Turkish Foreign Ministry also said that Israel's attempts to seize Palestinian land may harm the cease-fire between Gaza and Israel, and it is also pointed out in the statement that Israel should avoid measures that can hurt permanent peace efforts, and a two-state solution. Allegedly; the Israeli government justified further illegal settlements in the West Bank with the murders of three Israeli teenagers in June 2014. Many International human rights organizations define the Israeli attitude as "collective punishment." Israeli Minister of Economy Naftali Bennett in his visit to Etzion Settlement praised Israel's decision to seize lands in the West Bank."[It is the] appropriate Zionist response to murder, what we did yesterday was a display of Zionism. Building is our answer to murder." Bennett's statements apparently justified human rights organizations' concern about collective punishment.

Many countries have also condemned Israel's decision to extend illegal settlements in the West Bank, including Britain, the U.S., France and Egypt. The British Foreign secretary Phillip Hammond deplored Israel's action in the West Bank: "This is a particularly ill-judged decision that comes at a time when the priority must be to build on the cease-fire in Gaza.

It will do serious damage to Israel's standing in the international community." The U.S. defined Israel's attitude as "counterproductive," while Egypt's foreign ministry stated that it is "not a positive step, it contradicts international law and will have negative consequences on the peace process."