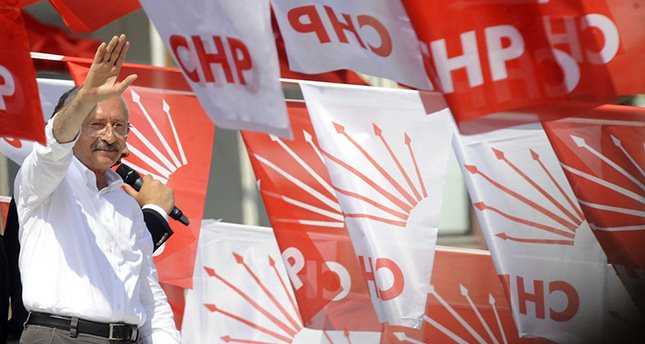 As CHP extraordinary congress begins today, current party leader Kılıçdaroğlu, accused of leaning towards right wing, is expected to secure his post against his rival Muharrem İnce and purge CHP dissidents who spoke out against him after Aug. 10 election defeat

Even though the party administration brought "unity" messages in the forefront in its slogans for the congress with an aim to dismiss "CHP dissidents to be purged" allegations, conflict among party members is continuing just a few days ahead of the extraordinary party congress. Kılıçdaroğlu is expected to discharge certain intra-party opponents to secure his current post.

Responding to the criticism targeting his administration, Kılıçdaroğlu signaled that CHP will part ways with CHP dissidents who raised their voices after the party's Aug. 10 presidential election defeat.

Speaking to Turkish Daily Hürriyet a day before the extraordinary congress, Kılıçdaroğlu dismissed the criticism against him and gave the message of a new roadmap for the main opposition.

Getting tough on intra-party opponents right before the extraordinary congress, Kılıçdaroğlu said, "I have always respected different ideas, but I will not allow statements that harm the party's credibility after the congress. We will separate our ways if necessary. There are rules in this party, either you abide by those rules, or you leave."

"He [Kılıçdaroğlu] does not like leftists and does not trust their power, which is why he keeps away from them," said İnce.

Daring Kılıçdaroğlu, İnce stated that he would garner 700 delegates' votes and claimed that CHP Chairman Kemal Kılıçdaroğlu is forcing to get the delegates' vote and took their signatures saying that an amendment in party regulations is necessary ahead of the congress.

"Which one is more influential – party regulation or party chairman? There is a pressure [on CHP members], that is why they cannot talk. There are CHP delegates saying that they will vote for me even though they signed on for Kılıçdaroğlu's chairmanship. I will shatter the fear in this party," said İnce.

Pledging to become the country's prime minister in 2019 and defeating the ruling Justice and Development Party (AK Party), İnce lambasted Kılıçdaroğlu by showing nine reasons why Kılıçdaroğlu has largely failed to become a successful leader of the main opposition. İnce listed his reasons by saying that Kılıçdaroğlu does not believe in consensus and accused him of not taking CHP member's ideas seriously.

Asserting that Kılıçdaroğlu is far from being scientific, İnce said that the CHP leader does not know about how to conduct perception management, nor does he conduct public opinion polls.İnce, echoing his previous sentiments, claimed that Kılıçdaroğlu likes the right wing while keeping distance from leftists. "He is far from assertive and always ready to be the runner up. He can never say I will win or challenge," İnce added.

Accusing Kılıçdaroğlu of moving away from the spirit of revolution, İnce said that Kılıçdaroğlu is distant from the public and does not understand their demands and expectations. "He does not think about leaving his post at all and has become a politician obsessed with his position. He says different things in different places. You could hear him say completely different things in Eastern and Western Turkey. He is not brave and is hesitant to take risks," added İnce.

The reason for the upcoming extraordinary party congress could be traced back to the presidential election when secularist CHP-nominated Ekmeleddin İhsanoğlu, a joint presidential candidate who served as the former secretary-general of the Organization of Islamic Cooperation (OIC), sparking controversy within the party.