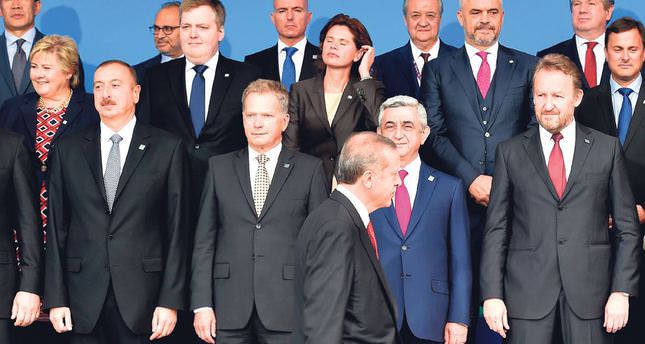 Attending his first NATO summit as the president, Erdoğan will meet with ten presidents and heads of governments to discuss spying allegations, Afghanistan and the ISIS threat

Turkish President Recep Tayyip Erdoğan is set to meet with world leaders including US President Barrack Obama at the NATO summit in Wales between Sept.4-5, after his two-day visit to Azerbaijan to boost ties based on history and strategic cooperation.

Wrapping up talks in Azerbaijan, Turkish President Recep Tayyip Erdoğan left for the Welsh city of Cardiff in the UK on Wednesday, to attend a high-level NATO summit. He is scheduled to hold talks with more than ten world leaders including Obama on two days he will spend in Wales. The bilateral meeting between Erdoğan and Obama is scheduled to take place on Friday marking a significant one since the two last met in May, 2013 to hold talks. Erdoğan, attending the NATO summit first time as Turkey's President, will also hold talks with German Prime Minister Angela Merkel. Erdoğan reiterated on Tuesday-ahead of the NATO summit during his first official visit abroad to Northern Cyprus-- that Turkey is determined to bring surveillance issues to the table in the upcoming NATO summit and U.N. General Assembly after German- based weekly Der Spiegel on Sunday alleged that the U.S. conducted spying activities targeting Turkey. According to the report on Sunday in the magazine Der Spiegel citing documents from the archive of US whistleblower Edward Snowden, Turkey was both a partner of the US -- with Washington closely cooperating with Ankara in its fight against the terrorist Kurdistan Workers' Party (PKK) -- and a leading target of US spying.

US State Department Spokesperson Jen Psaki responding to the allegations said on Wednesday: "I would point you to the [US President Barack Obama's] speech earlier this year where he talked about our own efforts to review our intelligence gathering. He announced a series of reforms."
Before it was revealed that Turkey was on the spying list of the U.S, It was reported that the National Security Agency (NSA) has been keeping tabs on Turkey. An official from Germany's cabinet made a comment on the allegations made in the German media suggesting Germany's Federal Intelligence Service (BND) had been spying on Turkey.

Merkel refusing to comment on the work of Germany's intelligence services when questioned about the alleged surveillance of Turkish targets Merkel was reminded of her words which said "eavesdropping is unacceptable between allies." after media reported in 2013 that U.S. intelligence monitored her cellphone.

When her words were repeated back to her but in regards to Germany's alleged spying on Turkey, Merkel responded that her words were for the U.S., not Turkey. "Those words of mine were said in the context of U.S. activities", a statement which many believed implied 'Turkey is not Germany's ally' Erdoğan will also meet with British Prime Minister David Cameron, Italian Prime Minister Matteo Renzi, French president François Hollande, Spanish Prime Minister Mariano Rajoy, Ukraine President Petro Poroshenko, Albanian President Bujar Nishani, Georgian President Giorgi Margvelashvili and Polish President Bronislaw Komorowski, at the NATO summit.