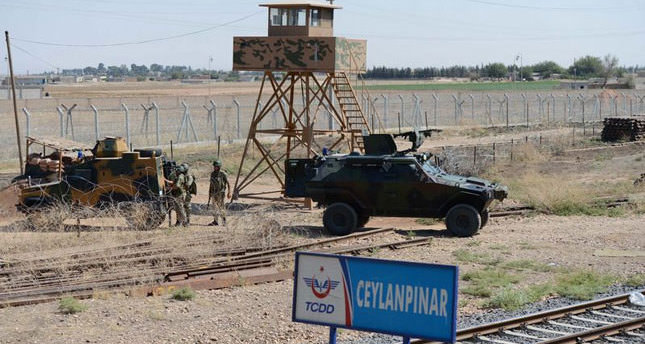 by Daily Sabah Sep 04, 2014 12:00 am
Turkish security units took 19 foreign citizens into custody at southeastern border province of Gaziantep for their alleged links to the Islamic State of Iraq and al-Sham (ISIS) and for attempting to cross into Syria from Turkey, Gaziantep Mayor Erdal Ata said.

All the arrested suspects are reportedly foreign nationals, Ata said. "There are people who come to our city for the sole purpose of joining ISIS. We take the necessary legal actions against them," he added said.

Some of the suspects arrived from Europe and Caucasian countries and were detained either in the Gaziantep airport or on the border by the Turkish officials, Ata stated. Those not involved in any criminal actions are sent back to their countries, whereas those involved in any crime are now standing on trial, he added.

Commenting on the news air by a German TV channel that "There is a military camp of ISIS in Gaziantep", Ata said, "That is a completely make-up news. Search for that camp all over the city. If you find it, I will apologize."

The images shown on the German TV channel, portraying an alleged ISIS camp in Turkey, could have been shot at anywhere in the world, Ata says. "Those images display only a couple of village houses and they could be taken anywhere," he said, adding that he firmly states that there is no such camp in Gaziantep and the Turkish government "could not let that happen."

Since the capture of the Iraqi city of Mosul by the Islamic State of Iraq and al-Sham (ISIS) and a major increase in terrorist activities of the organization, Turkey has begun facing accusations by Western media, claiming that Turkey allowed ISIS militants and weapons to cross its border, a claim that has strongly been denied by the Turkish government.

Despite continuous accusations against Turkey, no evidences have been shown to prove that Turkey aided ISIS, which is also listed as a terrorist organization in Turkey.

Although border security was reinforced throughout the four years of conflict in Syria and the new ISIS threat in Iraq, the country's long border with both countries is allegedly used by foreigners to sneak into the countries to join radical groups.