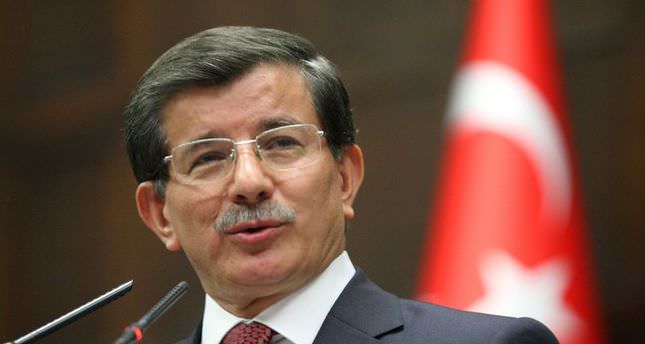 by Fatih Şemsettin Işık Sep 05, 2014 12:00 am
Whether or not the new prime minister of Turkey, Ahmet Davutoğlu, is a neo-Ottomanist has become a matter of debate.

The recent weeks have also witnessed a pan-Islamism debate after a Turkish lecturer penned an op-ed piece for The New York Times.

According to experts, although he has the characteristics of a conservative Muslim personality, Ahmet Davutoğlu has a broad foreign policy vision regarding Turkey's developing EU relations and strategic alliance with the U.S., and labeling Davutoğlu a pan-Islamist is a matter of disregarding historical context and focusing a restricted time period.

Penned by an assistant professor from Marmara University, a series of articles that claims Davutoğlu is a pan-Islamist stirred the pot among journalists and academics. In the pieces, the author asserted that Davutoğlu's ideas amount to a pan-Islamist's vision instead of a Neo-Ottomanist, as he is often labeled.

In the piece he wrote for The New York Times last week, Behlül Özkan said Davutoğlu "argued that Turkey would soon emerge as the leader of the Islamic world by taking advantage of its proud heritage and geographical potential […] Turkey must either establish economic hegemony over the Caucasus, the Balkans and the Middle East, or remain a conflict-driven nation-state that risks falling apart." This type of hegemony is conceptualized by Davutoğlu as a "Lebensraum" (territory claimed by a nation or state on the grounds that it is necessary for survival or growth). "Mr. Davutoğlu fervently believed that," Özkan said, "the Arab Spring had finally provided Turkey with a historic opportunity to put these ideas into practice." Yet for him, Davutoğlu has "archaic theories of expansionism."

In reply to what Özkan put forward, Ali Balcı, an associate professor at Sakarya University posted an analysis of Özkan's arguments on his official website. Balcı heavily criticized Özkan's identifying Davutoğlu's foreign policy in the frame of pan-Islamism which he finds quite essentialist "by arguing that the 'pan-Islamic' conclusions and analyses made by Davutoğlu as an academic in the second half of the 1980s and the 1990s can be used to understand Davutoğlu's later foreign policy […] There is an assumption that reveals itself as 'once an Islamist always an Islamist' strongly, suggesting that Davutoğlu's essential core is unchanging in the face of different times and conditions in which theory of modernity sounds pretty." Balcı said.

He also points that there is conflict in Özkan's comparison of late President Turgut Özal and Davutoğlu's foreign policy patterns. He said, "As stated by the writer, Özal applied for EU membership in 1987, worked to broaden influence in the Caucasus and the Balkans, tried to solve the Kurdish problem through reforms, and worked to establish control in its relations with Iraq. If all of these practical realities have also emerged during the AK Party and Davutoğlu eras, how can Özal be considered a neo-Ottoman while Davutoğlu is a pan-Islamist?"

Richard Falk, Albert G. Milbank Professor Emeritus of International Law at Princeton University and former U.N. Special Rapporteur on Palestinian human rights, finds Özkan's assessments are efforts "to portray Turkey as far more sectarian than its record suggests." Falk said, "Davutoğlu's deep commitment to the Turkish effort to become an EU member strongly suggests a different orientation as does his affirmation of continuity in relation to NATO and close ties with the United States," and added, "It is true that privately, Davutoğlu embraces Islamic values and worldviews, but he does so in a manner that is consistent with adherence to such universalistic perspectives as those embodied in human rights, international law, and Western and non-Western approaches to global justice."

Falk also thinks that Davutoğlu, as the new prime minister, will not alter the approach taken toward the Middle East from what it had been during his term as foreign minister. "He will be intelligently pragmatic and prudently principled, that is, neither a cynical realist (as, for example, Henry Kissinger), nor a dreamy idealist (supposing that law and morality can always guide policy in international relations)," he said.

According to Professor Paul J. Sullivan, Middle East and energy security expert at Georgetown University, Özkan's claim of Davutoğlu's pan-Islamism requires to have an Islamic Union and that union, given the realities of the Middle East region, "has a chance between highly unlike and zero." He said, "Pan-Islamic unions and neo-Ottomanism may be ideas for the coffee table and afterwork teas, but the practical matters facing Turkey today militate against such notions. I am sure Davutoğlu knows the practical matters.

He has been involved with them in the problems revolving about Cyprus, Gaza, Israel, the West Bank, Somalia, Syria, Iraq and more," and emphasized that Davutoğlu also had pragmatic sentiments in foreign policy: "These improved relations will need to develop in the near future. What one thinks as a professor in the quiet surroundings of academia can be very different when reality whacks one over the head and one has to make some very tough, practical decisions.And he has made many of those."

For Sullivan, having a full-spectrum foreign policy, Turkey has a potential to deal with the possible dangerous situation in Middle East in future. Sullivan said, "It will need to reach out to Europe, NATO (of which it is an important member), the U.S., Russia, China, Latin American and even India and much of the rest of Asia and Central Asia," and he added, "Prime Minister Davutoğlu seems to me to be a practical man and sees the threats out there. He is a conservative and a member of the AK Party [Justice and Development Party], but, above all, he is a leader of a powerful country in a complex world and in a dangerous region."

Behlül Özkan's exert of affiliating Davutoğlu with Pan-Islamism, is also problematic for Murat Yeşiltaş, assistant professor from Sakarya University. According to Yeşiltaş, Özkan using Pan-Islamism and Lebensraum in his work 'is out of historical context and quite eclectic for manifesting Davutoğlu's fantasy world'. Yeşiltaş stated "For instance, the concept of 'Lebensraum' is already criticized by Davutoğlu since it includes an expansionist policy in terms of ethnicity."

"Similarly, Pan-Islamism is an ideology that emerges against the Europe-oriented imperial order," continued Yeşiltaş and added "however, Özkan uses the term just in the context of Ottoman history reducing it into only a few intellectuals. Namely, we cannot see what Özkan understands from both concepts."

About New Turkey's foreign policy, Yeşiltaş is of the opinion that Turkey would use most of its energy towards the Middle East in regard to the latest developments and instability in Syria and Iraq which is parallel to Davutoğlu's foreign ministry term. He also draws attention to the urgency of security governance for Turkey. "Iraq and Syria turning into 'failed states' causes subnational groups (such as Kurds) to act through more security-oriented policies. Therefore, Turkey needs to contain a plan to eliminate crisis in the Middle East in its new era." stated Yeşiltaş.