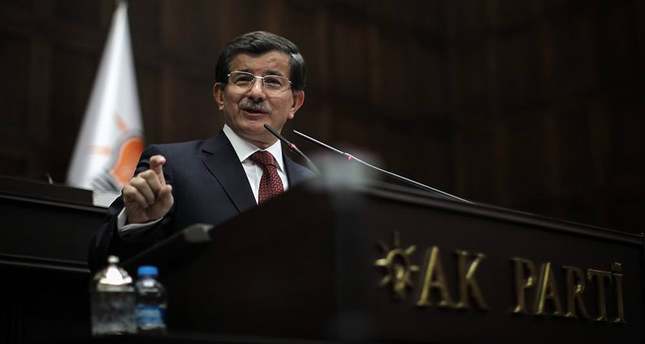 by Daily Sabah Sep 05, 2014 12:00 am
Turkey will not tolerate a "parellel state", the expression used to describe Gülen Movement's infiltration into state institutions, said Ahmet Davutoğlu, on his first appearance as the PM on a live tv programme Thursday.

"Our issue is not with the Gülenist Movement itself, but with the fact that this movement impairs democracy in Turkey and disregards legitimate authority," Davutoğlu said on the national public broadcaster TRT.

The Gülen Movement led by the controversial U.S.-based imam Fethullah Gülen who lives in a self-imposed exile in rural Pennsylvania is accused of wiretapping thousands of people including Turkish government officials and encrypted phones, with the help of affiliated members of law enforcement, public prosecutors and judges. Gülen's followers are believed to have orchestrated a corruption probe against Erdoğan and his inner circle, which emerged last December, in order to overthrow the government.

The Gülenists within the judiciary system and police departments impair the independence of these structures, according to Davutoğlu. The "parallel state" brings Turkey's energy and power down which the country has accumulated during Justice and Development Party's (AK Party) reign during the last 12 years, Davutoğlu said.

"This organization was going to drag Turkey into a turbalance," Davutoğlu said. "One will take off his uniform, should he want to be involved in politics."

Institutions run within a legal framework in Turkey and therefore the executive power does not put any pressure on the judiciary, according to Davutoğlu. "We do not want a high council of judges and prosecutors who share the same political views with the government, but those who give their decisions based on their conscious within a pluralistic structure," Davutoğlu stated.

In his talk, Davutoğlu wished that the HSYK elections to be taking place on Oct. 13 will not lead to a new clash between the government and judiciary, but will be the start of a new horizon.