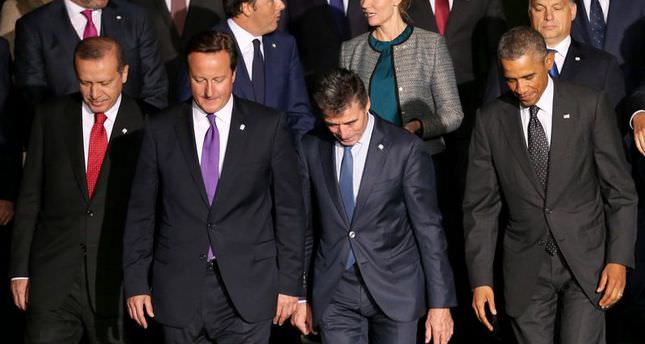 by Mehmet Ali Berber Sep 05, 2014 12:00 am
Turkey's President Recep Tayyip Erdogan and U.S. President Barack Obama held a nearly two hour meeting in the last hours of the 2014 NATO Summit in Wales, U.K. NATO allies discussed issues related to Iraq, Syria, Palestine, Libya and Ukraine. Prior to the closed-door meeting with Erdogan, Obama congratulated his counterpart for his election to the presidency. "Turkey plays an important role in the alliance, in part, because it is a bridge between Europe and the Middle East," Obama said.

Speaking to his counterparts during the two-day NATO summit in Wales, Turkish President Recep Tayyip Erdoğan criticized ally countries for not taking effective necessary measures in stopping its citizens from leaving their countries to join the Islamic State of Iraq and al-Sham (ISIS) in war-torn Syria and Iraq, both of which border Turkey.

Speaking to head of NATO member countries on Thursday and Friday, Erdoğan said that keeping silent over massacres of the regimes in the region is paving way for terrorist organizations and thus, necessary measures should immediately be taken with a great determination to confront the terror activities that threaten global security and stability.

Complaining about Turkey's Western allies' insufficient efforts in combatting ISIS, which has displaced and killed hundreds of thousands of people in Iraq and Syria, Erdoğan told British Prime Minister David Cameron that Turkey had taken all necessary measures. He later told Cameron that Turkey had blocked all foreign citizens whose names were given by the countries from which they held the passports from entering Syria and Iraq. He then said ISIS is more popular in Western countries and the issue should be questioned by the authorities of these countries. "These people [ISIS recruits] were educated and raised in your country," Erdoğan reportedly told Cameron.

Ten countries have formed a coalition against ISIS on the sidelines of the NATO summit in Wales, according to British government sources.

"These nations that have shown this willingness have sensibly arranged to stay in contact and discuss the further measures," said German Chancellor Angela Merkel, adding that they had all stepped forward without being asked.

The U.S. also said on Friday that it was forming a "core coalition" to battle ISIS militants in Iraq, calling for broad support from allies and partners but ruling out committing ground forces.

"We need to attack them in ways that prevent them from taking over territory, to bolster the Iraqi security forces and others in the region who are prepared to take them on, without committing troops of our own," U.S. Secretary of State John Kerry told at a meeting of 10 nations. "Obviously I think that's a red line for everybody here: no boots on the ground," he added.

The defense and foreign ministers and secretaries of the U.S., Britain, France, Germany, Canada, Australia, Turkey, Italy, Poland and Denmark met on the sidelines of a NATO summit in Wales to discuss a strategy for addressing the militant group that has taken over large areas of Iraq and Syria.

NATO approved wide-ranging plans on Friday to boost its defenses in Eastern Europe, aiming to reassure allies nervous about Russia's intervention in Ukraine that the alliance will shield them from any attack. The plan adopted at the summit includes creating a "spearhead" rapid reaction force and pre-positioning supplies and equipment in Eastern European countries so they can be reinforced within days in a crisis. Speaking during the summit, Erdoğan urged that Crimea's Turkic Tatar ethnic group should not be isolated in the region and that all necessary steps should be taken to protect Ukraine's territorial integrity. He also said there would be no normalization of ties between Russia and NATO if the Crimean issue is not solved in civil-war-stricken eastern Ukraine.

Erdoğan also spoke to Merkel and asked her to inform him regarding the recent news reports that revealed Germany's spy agency wiretapped Turkey for the past five years and told the German chancellor that such moves could affect the bilateral ties between the two NATO allies.

Erdoğan later held a meeting with Greek President Antonis Samaras in which the two leaders reportedly discussed bilateral ties and the reunification of Cyprus.